Excerpts from an article in Science by Mark Mancini, Dec 30, 2020 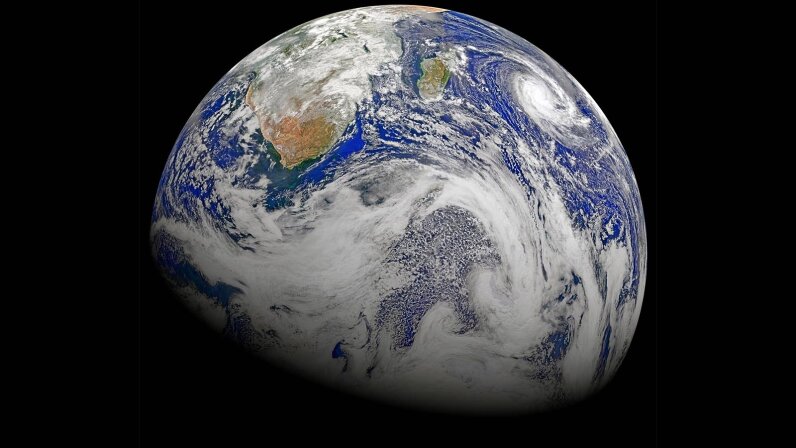 The word “earth” has roots in the Old English term “eorþe.” Eorþe had multiple meanings like “soil,” “dirt,” “ground,” “dry land” and “country.”

Yet the story didn’t begin there. Old English is the earliest known phase of what became our modern English tongue. Used until about 1150 C.E., it evolved from a parent language that scholars call “Proto-Germanic.”

The German that’s spoken today is part of the same linguistic family. “Earth” and “eorþe” are therefore related to the modern German word “Erde.” Not only is this the German language’s name for our home planet, but it can also be used to refer to dirt and soil.

Our dear Earth has relatives in some other languages, too. For example, there’s the Old Saxon “ertha,” the Old Frisian “erthe” and the Dutch word “aarde.”

All these likely descend from a Proto-Germanic term that was never recorded. (As far as we know.)

Nevertheless, linguists have been able to go back and reconstruct this mystery word. Spelled “ertho” in scholarly texts, it’s always preceded by an asterisk. The asterisk acknowledges the lack of written confirmation that the word was really used.

Nobody knows when people started using words like “Earth” or “Erde” to refer to the planet as a whole and not just the ground they walked on.

Back in 1783, German astronomer Johann Elert Bode named the seventh planet from our sun “Uranus” (after a Greek god). And though Pluto is no longer considered a planet, we know that 11-year-old Venetia Burney named it in 1930.

But if a single person gave planet Earth its English name — which is unlikely to say the least — his or her identity has been lost to the sands of time.
Still, it’s clear that while Mercury, Venus, Mars, Jupiter, Saturn, Uranus and Neptune all started out as the proper names of ancient gods, “Earth” did not. That’s why our planet is sometimes called “the earth” with a lowercase “e.”

However, according to the University of Oxford Style Guide, the word “Earth” should be capitalized when one is “referring to the name of the planet but not when referring to the ground/soil etc.” What a capital idea!

WHO NAMED OTHER PLANETS?

Jupiter was the mighty chief of the gods in ancient Rome’s pre-Christian religion. It was also said that Rome’s legendary founders, Romulus and Remus, were the children of the warlike god Mars, himself Jupiter’s son.

Astronomy has always been popular with those who study the Classics spelled with a capita ‘C’. Seven out of the eight planets in our solar system were named after Greek or Roman deities. Earth where we live is the only exception to that rule.

Urban legend says Venetia Burney named Pluto after the dog from Walt Disney’s Mickey Mouse cartoons. Pop culture historians have set the record straight: That cartoon pooch went by “Rover” until 1931, when his name was switched to “Pluto.” By then, Burney had already suggested the name “Pluto” for the faraway dwarf planet.

Mellowed out and enlightened septuagenarian. Tech savvy. Social writing is just a pastime to kill time. I keep contributing to several developmental projects in the area of engineering education, IT and Healthcare projects launched by my kith and kin. I am too lazy to write a book, 'cause I think my life itself is a book! I am also at www.facebook.com/sureshnrao
Login
Please login to comment
0 Comments
Inline Feedbacks
View all comments

DRAWSTRING DRAMA ( From Memories of My Childhood) We had a long sunny verandah. There was only one entrance to the house and that was at an extreme end of the verandah. There was our bathroom to the right hand side as you entered and two closed doors of the adjoining apartment which mostly remained…

(photo image) F. McKenzie Jr. (C-L), Commander of the US Central Command (CENTCOM), shakes hands with Saudi military officers during his visit to a military base in al-Kharj in central Saudi Arabia. Credit: AFP File Photo The US State Department has approved the potential sale of 3,000 precision guided munitions to the Kingdom of Saudi…