What Happens If Larsen C (Ice shelf in Antartica) Melts! Inset view in pic-1 is of South Pole. The  Yellow and Pink colored patches are the cracks  where Larsen C Ice Shelf is melting.

The rift development(s) linked to GLOBAL WARMING, are shown along side dates of photos taken from satellites.

If Larsen C ice sheet in Antarctica were to melt completely all of the world including south Asia will change.

All of Bangladesh (currently with 161 million people) would submerge into the sea!

There will be more green belt for agriculture to the north & north east of India than the south.

Flooding of the Mekong Delta would leave Cambodia Cardamom mountains stranded as icelands.

5000 years from now is what the environment scientists are giving for such a catastrophe to happen!

It will be Scary alright, but you and I won’t be there in this new world predicted in pic 2; some consolation!

Blue color shows the oceans of the world that will submerge various continents!

The new WORLD (shown in pic 2) will have more icy lakes inside the Americas (north & South) Africa and Europe.

Australia will only lose some coastal cities… its map will essentially remain the same.

Indian sub-continent will further push into the mid-atlantic and Eurasian plate; Himalayas would grow higher! 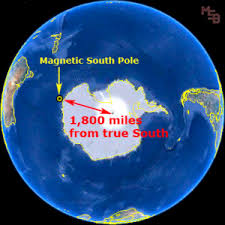 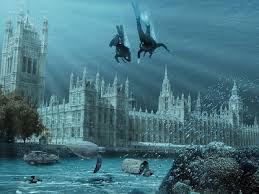 (pic 4) Scuba divers will have to find Big Ben & British Parliament as England and Ireland submerge!

Here is what Environment  Scientists are saying…

Mellowed out and enlightened septuagenarian. Tech savvy. Social writing is just a pastime to kill time. I keep contributing to several developmental projects in the area of engineering education, IT and Healthcare projects launched by my kith and kin. I am too lazy to write a book, 'cause I think my life itself is a book! I am also at www.facebook.com/sureshnrao
5 Comments
Newest
Oldest Most Voted
Inline Feedbacks
View all comments

Well, I wonder, would the residents of Dwarka have felt the same awe and fear had they been told that THEIR city would disappear beneath the waves, and would have to be discovered by future generations, with the help of ships and divers?

Thanks Arun for being here. For over a thousand years… after demise of Krshna… people were enjoying the maya-nagari created by maya-sura, enjoying the hidden wealth there… much of such wealth came to them from the days of churning of ocean mentioned in our Bhagwat puranas!

The other day I saw a more recent discoverer (from the west) on a boat lifting up a well cut stone slab from the submerged Dvarka. He was on the DISCOVERY CHANNEL.

Archeology Society of India (ASI) claims there are many unearthed artifacts buried there… but priorities first… all these ‘re-discoveries’ at submerged Dvarka can wait… there is more to be done in new cities of today than digging old submerged cities.

Very interesting. As of today, they seem to be like Nostradamus predictions or Bhrigu Samhitas found in Hoshiyarpur of those Nadi Shastra predictions of TN written on Palm leaves. Even if we do not get Moksha at the end of this birth, I don’t think our souls will slog for another 5000 years for salvation, but yes they way at times it rains in Mumbai or when unprecedented floods maroon half of Europe, it seems that such a day will come a much earlier than predicted.

Well, global warning is a matter of concern to future generations… does not matter if we are not going to be there 5000 years from now!
By the way, there is a big school of scientists (many from US) who are saying that no matter how much present day humans try to control fossil fuel emissions on planet earth, it is not going to change the way planet earth is warming up, year after year. Because, the planet itself is shifting the position of the South Pole (see a picture in blog) and because of that, more and more of ice at the south pole will directly face the sun and flooding of the oceans will happen. By the way, there is still billions of tons of frozen ice in South Pole… even if a 10% of it melts, the continents will begin submerging as in pic 2.

Navneet… I remember you mentioning that you may move out of ‘WordPress’ which is not allowing advertisers. Is that going to happen any time soon?

(pic) Karnataka farmers (lead by local congress leaders) do road blocking and bike rallies. DH photo I would like to think that Karnataka Police have been more alert than Delhi Police; no permission has been given by Karnataka Police to farmers to proceed to ‘Freedom Park’ in Bengaluru, using ‘Tractors’. In Karnataka, Police gave permission…

A.S. Pushkin and the Institution of Marriage

A.S.Pushkin and the Institution of Marriage  By Charumati Ramdas ‘Love’ happens to be an important theme of A.S.Pushkin’s works and consequently women occupy an important place in his works. Pushkin does not consider woman just as an object of love. She is pure, pious, beautiful, genius, source of inspiration for him. In his personal life…

Left hand does not know what the right hand does… PMO, Ministry, RTI reponses are all different!

I cannot understand why the central ministries and PM’s office cannot give the correct numbers and/or information on Covid committment by INDIA to other countries, including China to which assistance was given using an air force jet,  to deliver the aid to China at Wuhan! It is time PM/PMO consulted ministries before issuing public statements! …

Prime Minister Modi first brought the issue of open defecation into the open. As a result, he got millions and millions of toilets constructed mostly in the rural areas of India. This move was appreciated by International institutions like the UN. Now India is moving towards other measures to cleanse the country. It is easy…

India closes deal worth 374 million USD worth for indigenous Brahmos missiles. Bravo India! Philippines Navy has signed and sealed this giant defense deal to purchase from India, sophisticated Brahmos missiles (made in India under India-Russia joint venture.) This is a feather in the cap for India for its first “made in India” missile sale…

Note:- This article was written by me in March 2020 in preparation for posting some fresh articles on this website which was then under construction, but like all other things, the construction too got stuck in unexpected Lock Down and got inordinately delayed. A Fragile Life Ever since the outbreak of Corona Virus in…