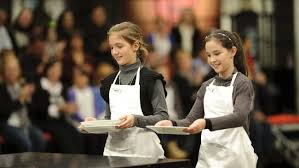 Last night I had a dream. I had a twin sister and both of us were very good cooks as well as qualified nutritionists.

We both had impeccable professional reputations.

One day, we were approached by a very large hospital and were offered jobs with a huge annual income. The only condition was that we should make sure we helped the hospital get a good reputation and everyone went away happy. We both, being professionals to the core, took those instructions to heart.

Knowing how fond most Indians are of oily, spicy food, I started serving all varieties of fried stuff, food rich in fats (cooked in dalda mostly) and made sure all the dishes I served had at least half an inch of oil on them. After all both my reputation as well as the hospital’s were at stake and consequently so was my job. People came, ate well, appreciated the fare and left contented. Not that they had much of choice. Outside food was not allowed inside the hospital and these people had no other choice. They were after all the patients’ relatives and had to be with them. Not that they were complaining. The food was pretty enticing after all.

Many of these people soon enough felt pretty ill, eating as much as they did. Some of them were tempted enough to ignore their health problems and dietary restrictions.

No surprise then, that they soon enough landed up in the same hospital as patients. And this was where my twin came into the picture. I had done my duty by pleasing people’s palates as well as by giving the hospital good business.

Now my twin being very conscientious made sure she gave these patients the healthiest, blandest and “tastelessest” (please forgive me for coining new words, but the existing words in the Oxford dictionary just do not serve the purpose of accurate description) food imaginable. 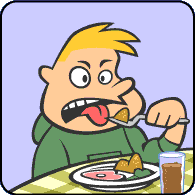 It did the patients a lot of good. It motivated them to get well as soon as possible so that they could flee the hospital at the earliest, thus freeing the beds for the next stream of patients who had been created in the hospital canteen. So the business turnover for the hospital was phenomenal, the doctors were making a fast buck and their reputations preceded them everywhere. At the end of the day, it was a win-win situation for all concerned.
And the cycle continued, until one day the hospital hosted a special function in honour of me and my twin sis (the food for which was of course catered by me – the hospital is certainly very business savvy)!!!!!
I woke up wondering how I had conjured up such a weird dream. Then I remembered my visit in the evening to a hospital canteen and the story of a patient who had eaten the offerings of the dietary department there. 🙂
(Images:  Google Images)

Brilliant dream about the business plan. God save us from these hospitals. I wonder why patient food is so insipid. They can make it at least edible. And invariably there is hardly any choice for the attendents

Haha Alka Ji- Edible it is, you can’t call it inedible. But well making it palatable is something they should consider, because forcing it down the gullet is difficult 🙂

The other thing that bothers me, Alka, is the quantity of food they send. I have begged them to send less, but each time they say ‘ok’ and there is still enough food there for 2 when one is not upto even thinking of food. Also reminds me of the time when as a 7 year old I had my tonsils removed. For months before that the doc had this misconceived notion that I was a pin cushion of sorts and kept sticking me up with penicillin shots every time he saw my face. On the day of my surgery, after the trouble maker was out of my throat, they brought offerings of ice cream for me and guess who ended up eating it? My sister!

Haha Ushaji- I can understand your pain and I can understand what Anatole would be going through when his dishes were rejected, one after the other 🙁 Food is delight. Every now and then I descry SmartSulekhika opening the door of the fridge to help herself with another “Pinni” and I won’t tell you what it is, though I am sure something similar must be there in South India too). A box of these sweets was given to her by her brother on Bhai dooj which is a festival of tying a sacred thread and of applying a tilak on the forehead of the brother to celebrate the holy brother-sister relationship in North India. She is not diabetic fortunately, because she can’t resist the temptation of having one last sweet, and having another one after that. You can call it jealousy or concern, but throwing up all of whatever it is to carefree air around her and the fridge door that she opens to have another one of those “Pinnis”. God bless her with a happy life, she is the second part of the phrase- Some people eat to live and some live to eat (sweets) , personified.

After reading your comment I did go to Google Guru and read the Pinni Recipe. Aw!! We make this too. I don’t blame Sulekhika for loving this.God bless her and may she be FREE OF DIABETES FOREVER!!!!

I have always been a devotee of food and so I can’t complain about the tastelessness. Even today I adore British boiled veggies with salt and pepper sprinkled on it. Talk of dreams – recently I was teaching a bunch of nuns Moral Science and when I turned round from the blackboard, many of them had escaped from the class!

Reminded me of a story from Laurel and Hardy series. First both of them visit neighborhood houses during day. At night they throw stones at glass panes and break some. Next day, they go around with a wheel borrow visiting houses with broken glass panes on how they can fix the glass windows! Their business flourished for some time!

Thanks a lot Suresh Rao. Have not seen this movie of Laurel and Hardy. Must look for it. Been ages since I watched one.

That was a lovely contribution Swati and let’s leave the enigma of who made your account here- you are welcome. This is a place for the people who love to write. Now coming back to your Post, the idea is brilliant and I am afraid that some hospital may not adopt it :). I am reminded of a snippet, which is somewhat similar. A person narrated that he happened to see two vendors standing opposite each other across a busy street, selling bananas. He wrote that he saw that the quality of their bananas was the same but one was selling them five rupees cheaper for a dozen than the other one and the one who was asking the higher price was not ready to give his stuff for a lower price and was abusing profusely the one across the road. Obviously, he wrote the one selling for less was doing a brisk business while there was none buying from the one who was asking the higher price. He said, that he happened to pass the same street the next day too and found the same scenario. This furthered his curiosity and he wrote that he couldn’t refrain from inquiring when on the third day, he found the same thing happening on that street. He wrote that he approached the one who had no buyers and asked him that why was he being so stupid when his rival was doing a brisk business. He said, that he was startled when the vendor made a revelation that in fact the vendor across the road was his brother and their this indeed was their selling strategy. 🙂 Now, since you have brought to me this story, you shouldn’t be surprised next time when you see this story as my next post. That’s what they are. We have stories, all around us. We, just fail to capture them.

Thanks a lot Navneet. Actually, this is not totally imaginary. In fact it is inspired by my own experiences in canteens of various hospitals as well as that as an in-patient.

Now that is indeed an interesting story. Looking forward to reading your next post.

“Namak Haram” was the name of one of Amitabh Bachchan’s hit movies. People who may have seen the movie might have understood the meaning of this pithy phrase, if  they were not familiar with it’s meaning before seeing the movie.While starting this article I made some search on Google and came across this interesting News…

Women who missed out on Nobel prizes

I wrote the following blog for our astronomy club’s monthly newsletter. The season of Nobel prizes is coming soon, in a week or so. It has been more than a century of Nobel prizes for the highest human achievements in the field of Sciences,Literature, Economics and Peace. Some controversies and some supposed misses have occurred…