Caves are natural wonders. Nature sculpts these underground dwellings by the action of water flow. They evoke beauty like the other natural formations –  canyons, waterfalls, mountains and forests. Several decades ago, I was fascinated by reading about a cave system called Mammoth cave in the state of Kentucky. I added it to my list of places to visit.  It languished there until last week.

In the US, things are opening up after Covid  vaccinations have reached more than half the population and the number of cases have dropped significantly. But that is not the case with other nations in the world. As a result, international travel is still restricted but national travel has become possible. As a result, the highways are crowded and so are the national parks.

I have seen other caves in the past.  Kanheri caves in National Park, Mumbai which were Buddhist viharas. Those seeking spiritual growth did inhabit caves in the past and some do even today in the Himalayas. Ajanta and Ellora caves are marvellous for the sheer number of them and the works of art the spiritually motivated created, thus forming a good harmony of human and natural artistic endeavors.

Earlier, I saw the Luray caverns in Virginia. Technically, a cavern is sculpted by dripping water from the top through a limestone layer. And forms beautiful columns called stalactites (they grow up from the ground) and stalagmites (they grow down from the ceilings).

Just a word of caution. All caves are not safe to go in. While they are dark and cool (a comfortable 55 degrees fahrenheit or 12 degrees centigrade all year around), they can be inhabited by bats or other wildlife  carrying viruses. One such virus from a cave in Southern China  caused the global pandemic.

The Mammoth caves national park is about an eleven hour drive from our home. On the way, we stopped at a cave which harbors a waterfall in Chattanooga, Tennessee. It is inside a mountain called Lookout mountain which straddles the border between Georgia and Tennessee states.  Walking for half a mile into the cave, we enter a huge chamber with a tall waterfall. This is a good prelude to what awaits us in the Mammoth cave. Picture shown below. 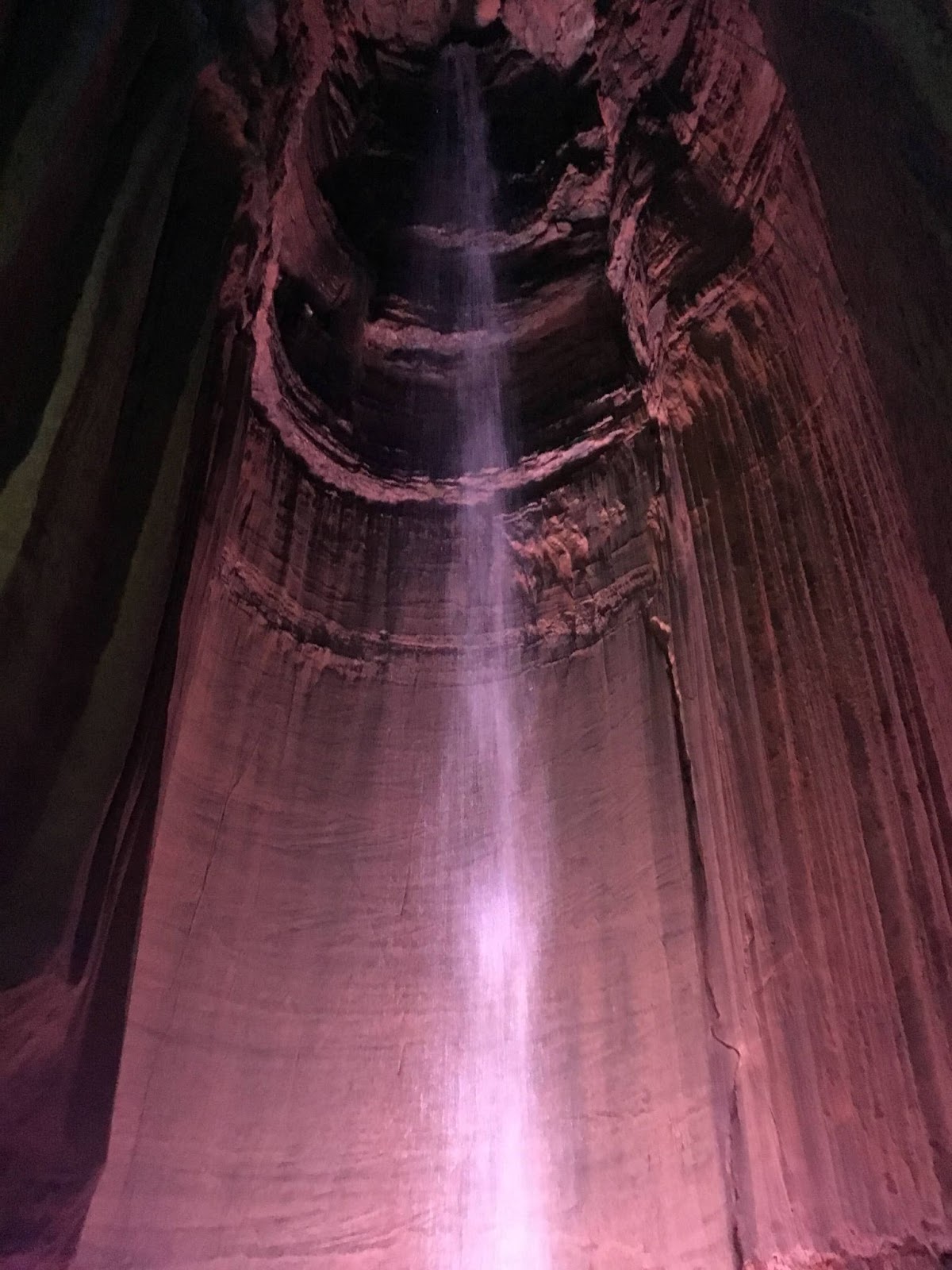 We then proceeded to Mammoth cave. This is not a cave, but a cave system. About four hundred miles of caves and natural tunnels have been discovered so far. It is expected that there are another two hundred miles waiting to be discovered. Given below is a pictorial representation I pulled from the internet. The whole area consists of limestone deposits with sandstone and shale forming a strong roof  over the caves, while underground rivers cut the caves into the limestone. The area has plenty of rain and a lot of sinkholes in the plains which allow the water to drip below to water tables. The caves branch out into all directions and there are multiple levels of them deep into the ground. Making it the largest cave system in the world. 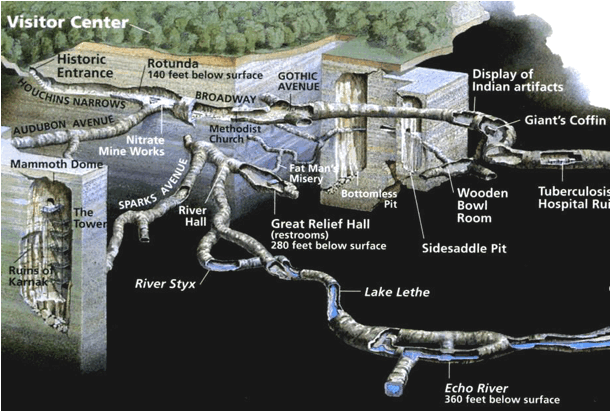 In spite of hundreds of miles  of caves, the access to visitors is pretty limited. Guided tours of a few miles and self guided tours of about a mile are the only ones available. Many of the tours fill up days or weeks in advance. Given below is the historic entrance to the Mammoth cave. There are hundred or so steps from the ground level. 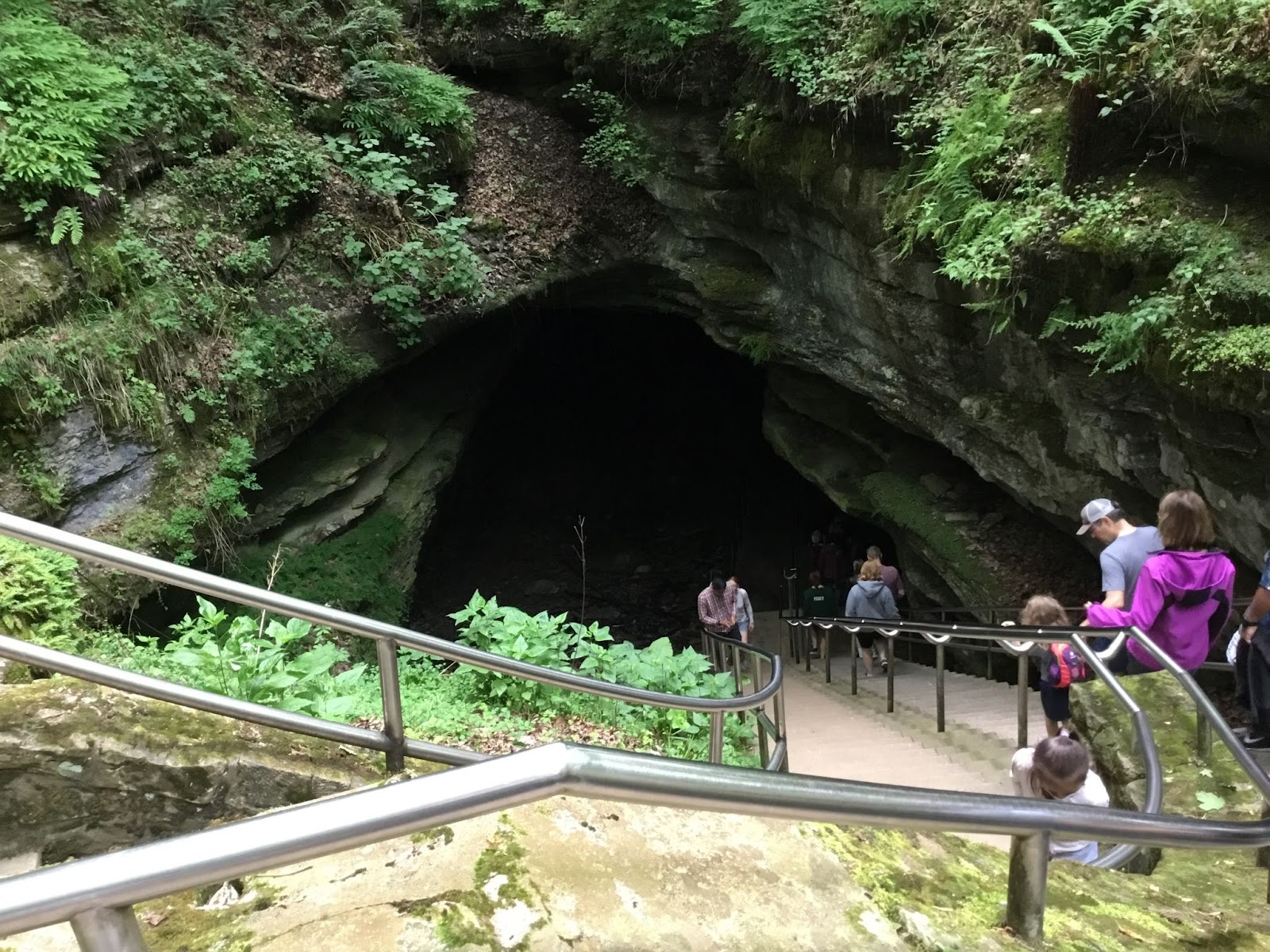 The inside of the caves are wide corridors and intersections, as if nature has created a town or a city underground. It is pretty dark except for some artificial lighting. Given below is the picture of a Rotunda, a circular structure from where intersecting passages emerge. The ceiling can be seen as a giant circle. 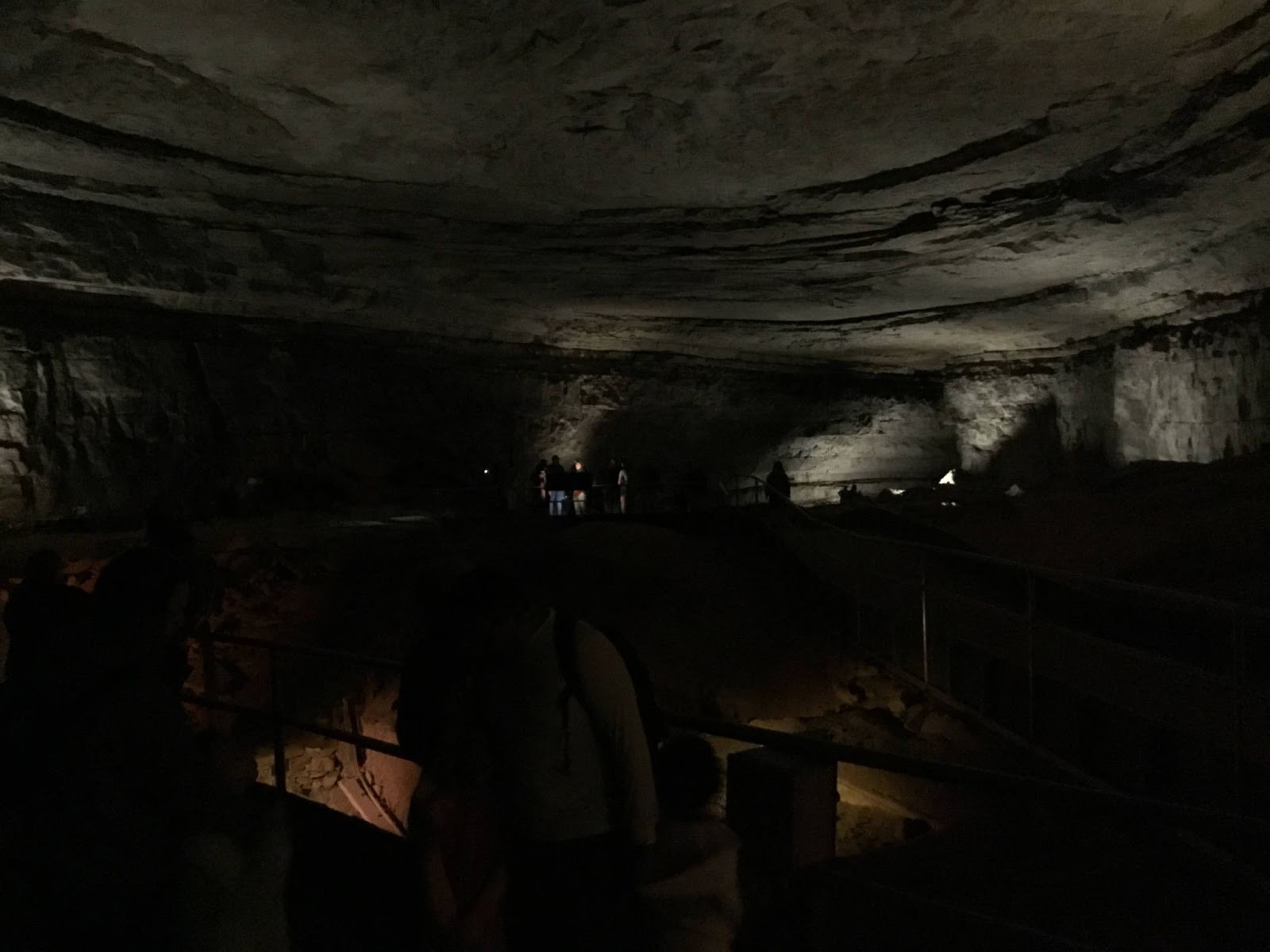 Given below is a wide avenue. 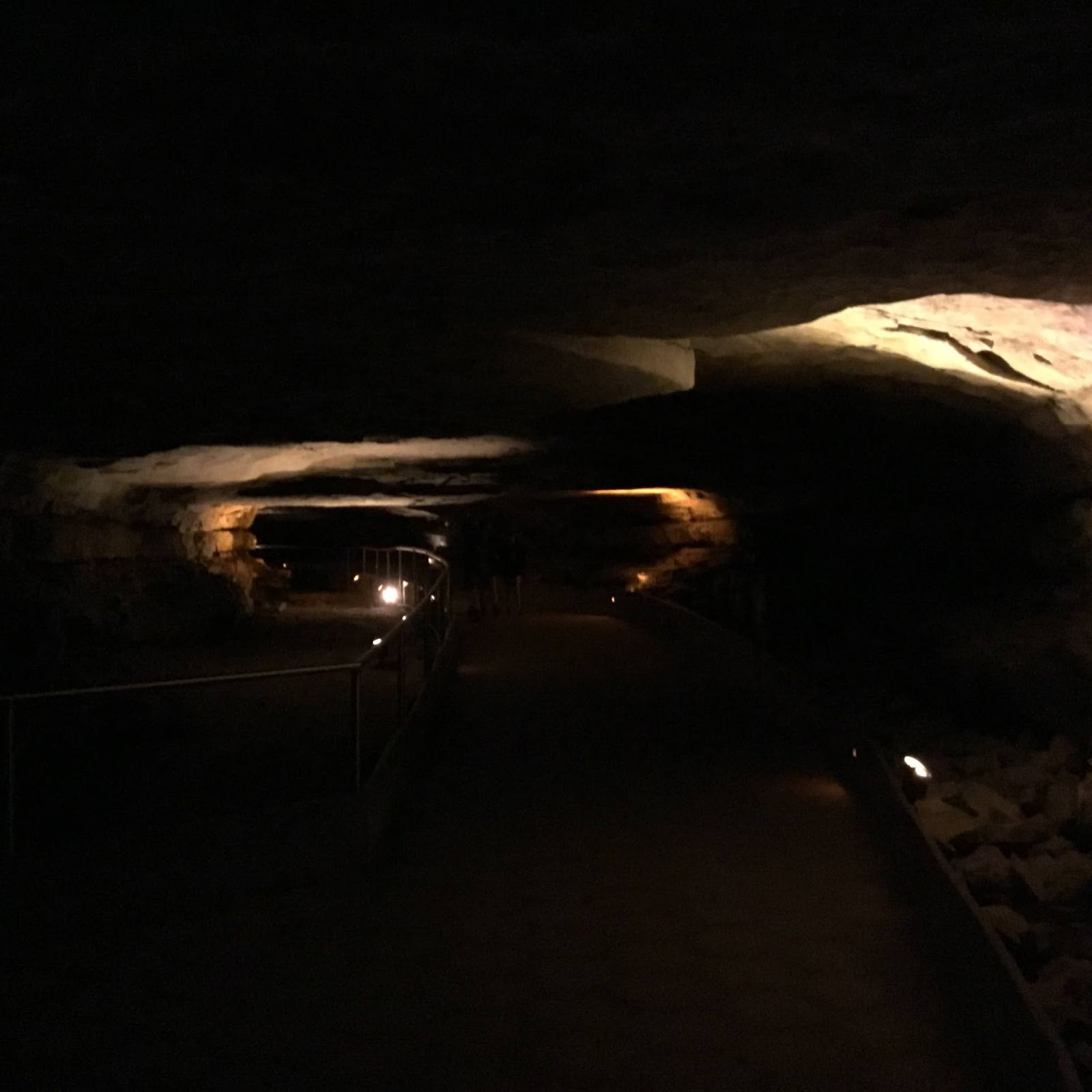 Given below is another avenue. 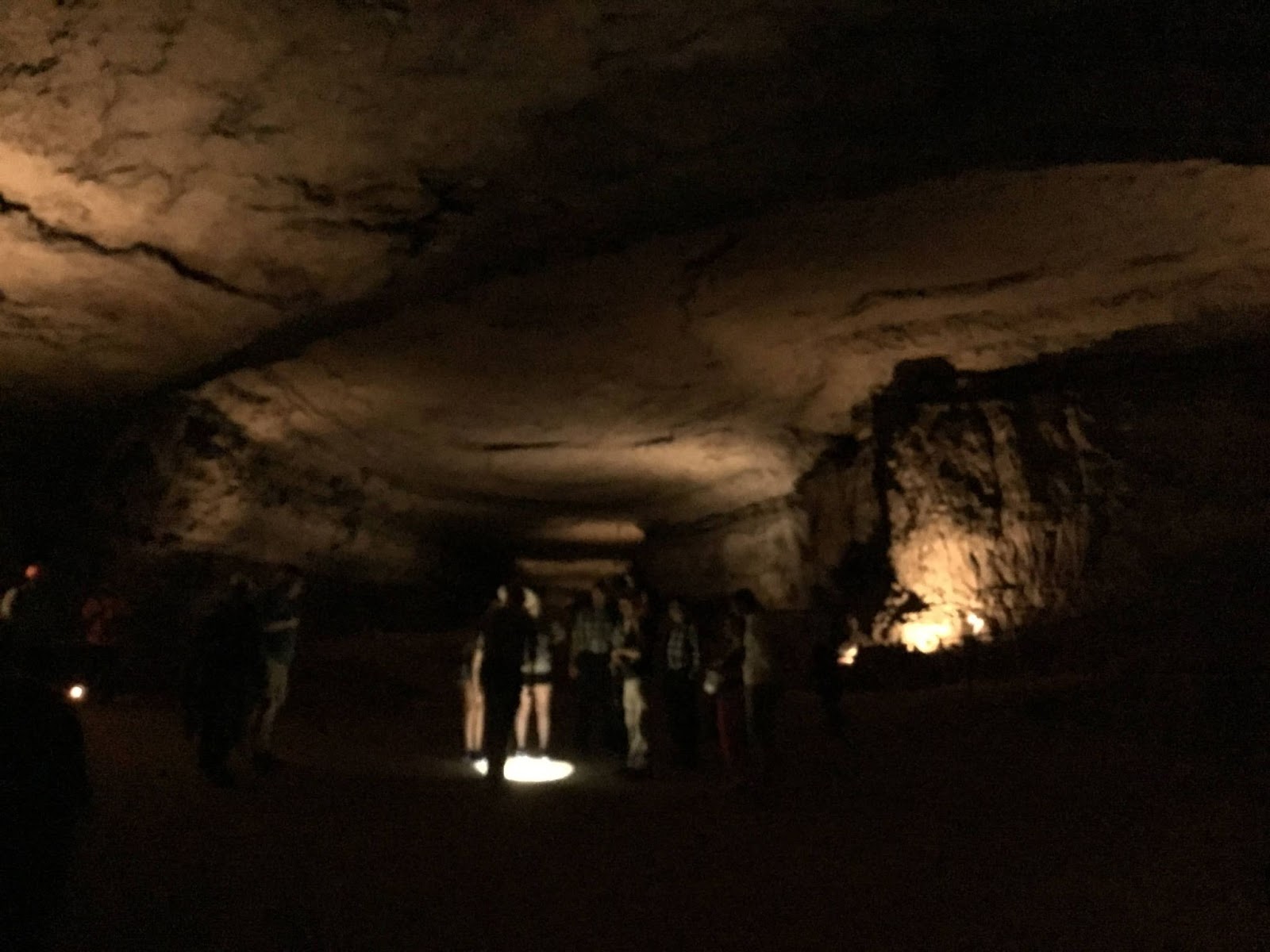 These caves were formed by a flowing river cutting into the limestone. If there is a vertical drip of water, it forms a different kind of beauty with columns of stalactites and stalagmites. Regardless, the caves are interesting structures to explore and to experience the beauty.

Good writeup Prasadji. I have visited the Luray Caverns in Virginia. The central area of the cavern was large enough to host a party with well lit spectacular stalagmites for background! I was told some enthusiasts did host a wedding celebration there one time.

Thanks a lot Suresh Sir for your comments. Yes, Luray caverns are very good.

I have also visited the Borra caves near Vishakapatnam (Telangana?) Borra caves are probably the deepest caves in India… going to some 80 meters below the surface.

Eighty meters below the surface? It must be scary. The very idea of going into the cave makes me claustrophobic 🙂

Spelunking is the hobby of cave searching. I am sure in America there must be clubs of seasoned and adventurous spelunkers. Though there are many caves in India, but except for some ghost stories associated with them, nothing much is known about them. There is said to be one cave near Solan on way to Shimla from Chandigarh where I live. The legend is that Pandavs spent one year of their exile hiding there as that was a condition imposed on them by Duryodhan. I don’t think anybody has entered that cave after them. Do the caves that you visited still have bat colonies in them? Thanks for sharing your experience.

Thanks a lot Navneet saheb for your comments. The caves I went to did not have any bat colonies. Pandavas are supposed to have spent the agyatavaas in the court of King Virat, in disguise. Arjuna became the dance teacher, Bhima the cook, Draupadi the maid servant to the queen and Yudhistar as the advisor to King. I have not heard of them spending time in a cave. It was in forest for 13 years and with Virat with 1 year.

Hahaha- Thanks for brushing my knowledge about Agyat vaas of Pandavs but the locals swear by the truth of it. I t might have been for some period when they had not yet decided upon where and how to spend that year 🙂

Enforcement Directorate (ED) of India has registered Prevention of Money Laundering Act (PMLA) case against Chinese national, Charlie Peng (also known as Luo Sang.)  on August 17, 2020. He was in 14-day police custody. No charge has been made yet on ‘Spying’ (if any) ED has alleged that Charlie Peng and associates are directly connected…

In Indian TV and Cinema, movie actors  hesitate to play bizarre or funny character roles.  This is not so in TV serials and Hollywood Cinema in the west. Many good looking Stars and Starlets play bizarre character roles which is often totally different in role play compared to the way they are in real life. …

Of late, the biggest and oldest Indian political Indian National Congress is facing several crises. Be it Rajasthan or Maharashtra, or even at the Centre, this party is now facing difficulties in handling the crises it faces from time and again. At the outset, let us all agree that the Congress post 1969 is totally…