Survival of the Wisest

Survival of the Wisest (A true story from yesteryears)

A tribute to (late) Jonas Edward Salk MD. We need a Virologist & dedicated Scientist like him today. Hope a vaccine for Covid-19 will be invented soon.

Darwin first used Spencer’s new phrase “survival of the fittest” as a synonym for natural selection in the fifth edition of ‘On the Origin of Species’, published in 1869. Charles Darwin used that phrase as a metaphor for “better adapted to immediate, local environment” and, not to refer to survival of “the strongest animals or birds or for that matter humans in best physical shape.”

In other words, if some species of birds or animals are forced to live in a climate to which they are not accustomed to, they can perish. Can an elephant, stronger than the camel survive in deserts of Arabia? No, right!? That is what Darwin wanted to convey when he used Spencer’s phrase: “survival of the fittest” coined in 19th century Europe.

Jonas Edward Salk, the 20th century American medical researcher and virologist first coined the phrase “survival of the wisest” at a time when not many paid attention to a new vaccine he developed and no volunteer would come forward to try it out. Jonas, his wife and members of his own family had to take the vaccine orally to prove that it was safe.

Jonas Salk was born in New York City to parents from Ashkenazi Jewish Russian immigrant families. Although they did not have much formal education, his parents were determined to see their children succeed. While attending New York University School of Medicine, Jonas stood out among his peers not just because of his academic prowess, but because he chose to do medical research instead of becoming a physician.

This was the time when Polio (formally known as, Paralytic poliomyelitis) a medical oddity & infection continued to baffle researchers for years. It was first recorded in 1835 and grew steadily more prevalent. It took a long time to learn that the virus was transmitted by fecal matter and secretions of the nose and throat. It entered the victim orally, established itself in the intestines, and then traveled to the brain through the spinal cord. By the end of 1990 it was estimated that 500,000 people worldwide had been affected and no known cure was available.

During the 1914 to 1919 ‘polio epidemics’ in the U.S., physicians and nurses made house-to-house searches to identify all infected persons. Children suspected of being infected were taken to hospitals and the child’s family was quarantined until they were no longer potentially infectious, even if it meant they could not go to their child’s funeral if the child died in the hospital.

Polio infected people would often suffer from acute breathing problems; they would be put inside ‘iron-lung” a machine that would isolate them from unaffected people and also allow them to breathe inside the machine! 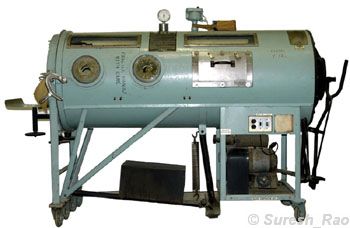 According to American historian William O’Neill, “Paralytic poliomyelitis” was, if not the most serious, easily the most frightening public health problem of the postwar era.” He noted that the epidemics kept getting worse and its victims were usually children.

However, polio did not gain national attention until 1921, when Franklin D. Roosevelt, former vice presidential candidate and soon to be governor of New York, came down with a paralytic illness, at the time diagnosed as polio. At the age of 39, Roosevelt was left with severe paralysis and spent most of his presidency in a wheelchair.

Nearly 58,000 cases of polio were reported in 1952, with 3,145 people dying and 21,269 left with mild to disabling paralysis. In some parts of the country, concern assumed almost the dimensions of panic.

According to a pamphlet issued by the Emerson company in April 1956, “In the slow progress against Polio (Paralytic poliomyelitis) the ‘iron-lung’ has become a symbol of victory. Respirators have brought the breath of life to thousands, and of those who owe their lives to this temporary mechanical aid, the great majority are now completely free again from reliance on it.”

This pamphlet was issued a year too late for Dr. Jonas Salk’s first vaccine against Polio showed that it works in nearly 80% of patients who took it. It was available in 1955 in USA. That saved hundreds of thousands from getting locked up in the ‘iron-lung’ 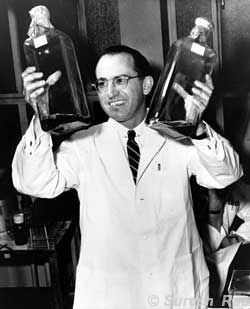 3-decades later and after successful large scale trials that showed 100% success in many critical polio cases Salk vaccine was finally recognized as the best cure for Polio.

On May-6 in the year 1985, President Ronald Reagan declared- “it is Jonas Salk Day today!” 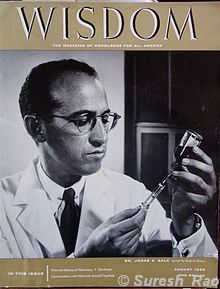 As one of the only living scientists whose face was known the world over by then, Salk avoided public eye. But media would not leave him.

Airplane pilots would announce that he was on board, and passengers would burst into applause. Hotels routinely would upgrade him into their penthouse suites.

A quiet meal for Jonas Salk at a restaurant inevitably meant an interruption from an admirer… and scientists approached him with drop-jawed wonder, as though some of the stardust might rub off.

Jonas Salk preferred not to have his career as a scientist affected by too much personal attention, as he had always tried to remain independent and private in his research and life. But this proved to be impossible.

“Young man, a great tragedy has befallen you— you’ve lost your anonymity”, the late television personality Ed Murrow said to Jonas Salk, shortly after the onslaught of media attention.

When Murrow asked him, “Who owns this patent?”

Jonas replied, “No one, could you patent the Sun!”

A version of this true story has been published by the author before at creative.sulekha.com/blogs

This post has a few edits from the older blog of same theme.

Well said Navneet. We need such dedicated people today to combat the menacing Covid19 virus which has spread globally.

Some people are so dedicated to the cause that they do not understand the applause they get or even the impact of their findings on the lives of the people. I would say that they are the unsung sons and prophets of Gods, who came on earth to liberate the people of their misery.

(pic is a facbook image of a website where one can find Harini Rao a popular Telugu playback singer) Harini Rao has rendered a very popular Sanskrit greeting from Chinmaya Mission,  a Happy New Year Greeting, written and composed by Swami Tejomayananda ji, Head of Chinmaya Global Mission (Head qts. USA) If you can access…

A Close Encounter With A Baba- Humour

A Close Encounter With A Baba Normally I keep them all at an arm’s length, but that proverb seems very inappropriate because I wouldn’t like to visit even the “Pandal” where any such person may have plans of giving his version of “Gyan.” It is not that I am averse to getting “Gyan” but I…

Quantum weirdness.  John shot up from the bed and sat on the edge transfixed. He didn’t know what hit him and why he felt the shock. He closed his eyes and tried to figure out what made him leave the lovemaking halfway just as his wife was coming to.  When he opened his eyes after…

Friends; as you are all aware the farmers agitation, particularly from farmers in Punjab, UP, Haryana and Delhi at New Delhi, has reached its 30th day with no indication of settlement. The agitating FARMERS want that the so called ‘FARM LAWS (the 3 laws recently passed in Parliament)’ be withdrawn in ‘Total’. Today’s street agitation…