Sir MV was  well known in India and a few Asian & Middle Eastern countries as a diligent, honest engineering administrator and professional who inspired and supported the meritorious among his subordinates. 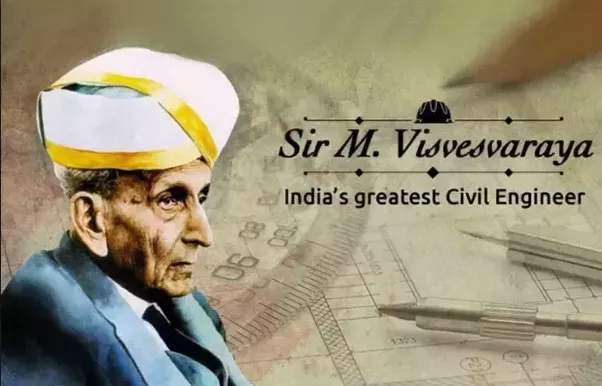 People who have known Sir MV have said that he was a man of high principles; he did not favor even one single person from his own family if the family member did not have professional integrity and work ethics. Some of his family members disliked him as they got no undue benefits from him despite his high profile status in the government. He did not enjoy matrimonial harmony either… his wife left him during early years of their marriage.

He served in the erstwhile state of Mysore under Maharajas of Mysore for long years as Chief Engineer taking up several projects like the KR Sagar dam which even today is a multipurpose dam that supplies water to many irrigation projects and also drinking water from Cauvery river to parts of Karnataka. The Mysore Iron & Steel Works, Bhadravati (in neglect now…) that he built made quality steel for the first time in India.

Sir MV’s often quoted messages are (were)… “industrialise or perish”, “dash the rocks and dam the rivers that flood!”

Those who were closely associated with Sir MV… talk about how strict he was about using government resources for personal and private use. It has been said that he used to carry two sets of good size candles when he went on inspection tours to Mysore villages where there was no electricity; one set of candles he would use when he scrutinized and reviewed government files late in the evening… then he would blow them out and light up a separate set, purchased from his own money, for reading books and newspapers that interested him before going to bed! Another incident often quoted is about use of government car given to him; it appears he went to work on the very last day of his retirement in his chauffeur driven car as usual, but that evening he would not take the government provided car back home… he took a taxi cab back home since he had retired from government service!

Engineers who graduated from the University Visvesvaraya College of Engineering (UVCE) at Bangalore have excelled in many organizations in India. UVCE boasts among its alumni Army Generals, Brigadiers, an Air Vice Marshal and Indian Navy Captains (my first cousin, Commander N.R.Rao, on my father’s side of the family, among them!) UVCEians also boast among their alumni… Public Works or other Department Heads of Government of India, Indian Railways, Indian Institute of Science (IISc) Indian Space Research Organisation (ISRO), Engineers India Ltd, Council of Scientific and Industrial Research (C.S.I.R,) State Government Electricity Departments and Public Works Departments (PWDs,) University Vice Chancellors (VCs) and hundreds of prestigious private as well as public limited corporations like BEL, BHEL, BEML, BESCOM, KPCL, HMT, HAL, INTEL, INFOSYS, TELCO, TISCO, WIPRO… in India and AT&T, Lucent, AMAZON, GE, GM, GOOGLE, IBM, Facebook, Microsoft, Yahoo and so on… at many parts of the free world.

I enjoyed the visit to my alma mater, University Visvesvaraya College of Engineering (UVCE) Bangalore, recently. UVCE is the first engineering college I graduated from, in the year 1963-1964; the college was started in year 1917… it has stood its ground for over 102 years at K.R.Circle… close to Century Club, Central Library, Karnataka High Court building, Vidhana Soudha (Karnataka Legislative Assembly building) and a few other well known landmarks in Central Bangalore… near scenic Cubbon Park area of Bangalore.

Engineering education I got at the UVCE equipped me to go for higher education at Indian Institute of Science (IISc, Bangalore, India;) and Pennsylvania State University (at King of Prussia-Malvern Campus, Pennsylvania State USA.) Education at UVCE also helped me serve organisations like the Council of Scientific & Industrial Research (C.S.I.R-IIP Dehradun, India), Burroughs Corporation USA, General Electric Corporation (GE) USA, Bell Labs and AT&T Corporation at USA (from where I retired in the year 2002.)

Hundreds of thousands of students have graduated from the UVCE college… it is very opt that this college bares name of its founder, Bharat Ratna, Sir M Visvesvaraya (known popularly as Sir MV,) who was Diwan of erstwhile Mysore State from 1912 to 1919.

During a visit last year to my alma mater, UVCE, I was one of many alumni who  interviewed current students for UVCE foundation scholarships.

Mellowed out and enlightened septuagenarian. Tech savvy. Social writing is just a pastime to kill time. I keep contributing to several developmental projects in the area of engineering education, IT and Healthcare projects launched by my kith and kin. I am too lazy to write a book, 'cause I think my life itself is a book! I am also at www.facebook.com/sureshnrao
Login
Please login to comment
4 Comments
Newest
Oldest Most Voted
Inline Feedbacks
View all comments

Whole of India is proud of him. Today, I have got many messages on Engineers Day with his picture on it, but sadly not many people know of his achievements besides that he showed how to calculate the speed of the train from the knocks it made while passing over the sections of rail tracks. Such people of high integrity are hard to find and living with them is difficult because of the principles they live by. I hope UVCE still maintains the high standards of quality education that it has had for over a century. Happy Engineers Day.

Yes, Engineers Day also bears his name. He was a workaholic and man of principles.

Also, recently the Karnataka State Cabinet has approved the process to make UVCE an autonomous university like the IITs of India. It needs 100 crore funding to become autonomous. The College authorities hope such funding will come in next 6 to 10 years from UVCE alumni donations now all over the western world!

By the way, I have added a link at bottom of blog to take a tour of UVCE. the colleges and university under the UVCE banner give good engineering education in 6 undergrad streams. Tuition fee is very reasonable. Climate in Bengaluru is very conducive for education.

This blog post is a part of series “Amarnath Yatra 2011” which I undertook with my cousins in the summer of 2011. After almost 18 hours of bus ride from chandigarh to Jammu-Kashmir we reached our first stop Pahalgam.   a lot of people brought their home cooked food (mostly biryani) and were seen enjoying…

Recently, India Today celebrated 45 years of its existence. It is a magazine which started in1975. I was hooked to it almost since its inception. I had breaks in between when I moved to the US. Then it became possible to subscribe to the print edition. Then came the digital edition. Now, the digital edition…

Kishore Kumar whose 91st birth anniversary falls today, was one of the brightest stars of Bollywood Cinema. He was a class apart from the rest of the artists of his genre, because he had the versatility that none could match. He died thirty three years ago, but the songs that he sang sound so refreshing…