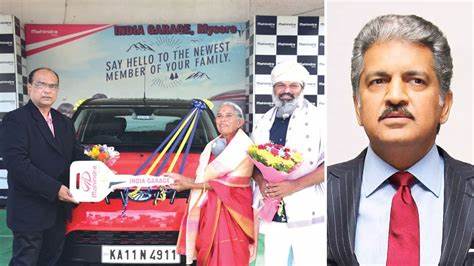 (pic-1) Brand-new SUV handed over in Mysuru to Dakshinamurthy Krishna Kumar who travelled pan India with his mother on a scooter covering 56,522 kilometres in four countries to give his mother a temple run or Spiritual Bharat Yatra! (pic, is a download from Star of Mysore website)

Son and Mother visited holy places in India and on foreign land. Krishna Kumar calls his journey along with his mother ‘Mathru Seva Sankalpa Yatra’ which roughly translated to English means a journey to fulfil a mother’s wish.

After two years and four months of travelling, both the mother and son have returned to Karnataka and are now staying in the Ramakrishna Ashram at Teggihalli village in Madhugiri taluk.

Not even once did his 20-year-old (2000 model) Bajaj Chetak scooter (KA-09 X-6143) break down in the journey that was full of ups and downs, plains and elevated roads. But there were a couple of punctures in the tyres. Krishna was working as a corporate team leader in a private company in Bengaluru and had a handsome salary package.

‘Promises are meant to be broken’ goes a saying.

But for Anand Mahindra, Chairman of Mahindra and Mahindra Group, promises are to be kept and fulfilled.

As per his promise, Anand Mahindra has delivered a vehicle to city’s Dakshinamurthy Krishna Kumar who has successfully taken his 70-year-old mother, Choodarathna, on a Bharat Darshan Yatra or Mathru Seva Sankalpa Yatra on a 2000-model scooter.

After a two-year-eight-month pan India temple run on a scooter and covering 56,522 kilometres through four countries Dakshinamurthy Krishna Kumar and his mother Choodarathna returned to their house at Bogadi on Sept. 16. In the course of their spiritual sojourn, the mother-son duo travelled across India and even visited Nepal, Bhutan, Bangladesh and Myanmar.

The mother and son duo started their journey on Jan. 16, 2018. Their journey had caught the attention of Anand Mahindra who had tweeted months ago that he will gift a Mahindra KUV 100 NXT. As per the promise, the vehicle, worth more than Rs. 9 lakh, was delivered to Krishna Kumar.
The mother-son duo was asked to visit the Mahindra showroom at Hinkal. Choodarathna and Krishna Kumar were received well and honoured before handing over the keys of the vehicle registered as KA-11-N-4911.

The keys of the SUV were handed over by showroom General Manager K. Sukeerthi. There was a some delay in handing over the vehicle as the mother-son duo was on a transit and also due to COVID-time lockouts in the region. Krishna Kumar and his mother were travelling when Anand Mahindra tweeted that he would gift the vehicle.

We waited for him to come to Mysuru. We registered the vehicle in Mandya as Krishna Kumar hails from Srirangapatna though they are settled at Bogadi in Mysuru,” Sukeerthi told Star of Mysore.

Accepting the gift, Mahindra KUV 100 NXT, Krishna Kumar said that he was humbled by the gift. “This gesture is noble and I have never expected. I would like to call Anand Mahindra as the king among gift-givers. May God give him more strength to serve the humanity and gift more and more,” he said.

Promises are easy to make and difficult to keep. M&M have fulfilled their promise and earned considerable goodwill.
RRG.

In a nutshell, as stated in blog, Krishna Kumar wanted to fulfil promise to his mother to take her on pan India temple tour with whatever vehicle he had at the time! Perhaps they stayed in temples or hotels nearby all along… just carrying some money and credit card. Krishnahad a good job at Bengaluru, resigned from it to take his mother on the only vehicle he had on this long and backbreaking journey! His determination paid off. Anand Mahindra tweeted to wish him success enroute (not sure if Bajaj is linked with Mahindra and Mahindra company or not!)

Anyway… a great feat accomplished well. It was nice of Anand Mahindra to gift him a brand new SUV!

A promise kept by the son also. I don’t know why he decided to undertake the journey on the scooter. Perhaps, it was a part of the pledge or else they could have chosen a four wheeler at least. Besides having the dangers of travelling on a two wheeler, I wonder how they would have carried some of the essential utility items that they might be needing for their day to day needs. But it’s a story of great grit and determination as much of Krishna Kumar and his mother as of a twenty year old Bajaj Chetak too 🙂

Winter is around once again. Every time when someone asks me about what I write, I start making some effort of compiling my writings, lost in the oblivion. Those that I can access easily are my blog posts. For more than fifteen years, I kept posting them fairly regularly at Sulekha.com. Yesterday when my wife’s…

One of the most enduring memories of my child hood were scraping, probing, groaning and blood letting sessions that grandpa undertook which could loosely be describes as having a shave. The whole tedium started with gathering all the implements of ordeal and stacking them on a table outside in sun. A convex mirror was of…

In between those morning tunes and songs I used to wake up. Sometimes I would hear mother’s voice calling me. Kakaaaaaaa, ve Navneeeet- that’s how she used to call me. I don’t remember hearing my pet name Bhola from her. She used to be in the kitchen and the aroma of preparations for the…

********** Revisiting Shimla*************** So, we are back to home at Chandigarh after a trip to Shimla. That was an engrossing trip, I took to relive the memories of my childhood spent sixty years ago. The ground under my feet didn’t feel any different, but the horizon had all changed. Not as far as my old…

Today I will take you to, yet another Shiva abode located amidst the serene hills of Uttarakhand but this one is totally different from the groups of temples I had talked about hitherto. And I fore warn that this is going to be a long post. We visited Patal Bhuvneshwar in 2002. The place might…