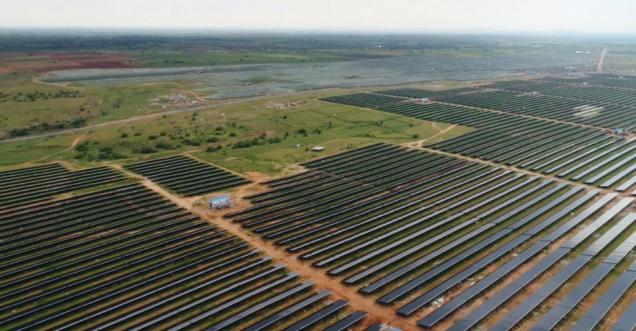 By the end of 2018, the parks planned had a total capacity of 2,000 MW. When all projects complete, Pavagad Solar Park will be the world’s biggest solar farm.

The park, known as Shakti Sthala is located around 180 km from Bengaluru in the Pavagada region of the tumkur district.

MANY FARMERS SOLD THEIR PRIVATE HOLDINGS (lands) CHEAPLY to GOVERNMENT OF KARNATAKA, WHEN THEY WERE UNABLE TO GROW GREEN CROPS IN ARID ZONES IN THIS REGION.

DESPITE ALL THESE SOLAR CAPACITY BOOST, CORRUPTION AND POLITICS IN KARNATAKA IS RESPONSIBLE FOR POWER SHORTAGE IN KARNATAKA.

Is the land too arid to support crop of any value? The area adjacent to the park appears to be quite green.

Only because of recent rains (a record for this season) wild brush has grown there. For ages farmers in the area could not grow crops there; most of them sold their land cheaply to government of Karnataka! In last 7 to 8 years the Solar Park is being built; the ‘Pavagad Solar Park’ at Tumkuru (near Bengaluru,) is a joint venture between Solar Energy Corporation of India (SECI) and Karnataka government; most funding is from the Central government at Delhi.

Synopsis: This is a fictional story. The main character in this story is an young lawyer who graduates at the top of his class from a  law school and joins the law firm of a famous criminal lawyer. The young lawyer wants to abolish ‘capital punishment’ in the country as he feels that many a…

A type of digital crime called ransomware is making rounds. It is a digital attack impacting the data stored on computers across the world. The stolen data is not retrievable unless a ransom is paid. The concept of attacks and ransom is as old as human civilization is. But now the content and the techniques…

President Donald Trump and First Lady Melania Trump have tested positive for Corona Virus. They both have been quarantined separately. President Trump is at Walter Reed Medical Center, where he will spend “the next few days.”  Trump has had a fever since this morning, a source said. He received a dose of the experimental Regeneron…