A RE-WRITE FROM A PUBLICATION BY Dr TREVOR ENGLISH

Mobius Strips: So Simple to Create, So Hard to Fathom 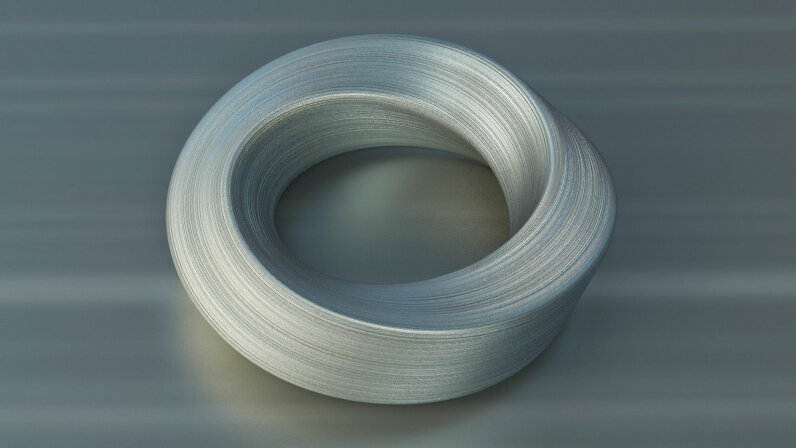 (pic) Möbius strips are both simple and mystifying at the same time. Dimitri Otis/Getty Images

The mathematics of otherwise simple-looking objects can be surprisingly perplexing. There’s likely no greater example of this than the Möbius strip.

It’s a one-sided object that can be made by simply twisting a piece of paper and connecting the ends with some tape. If you were to follow the loop around with your finger, you’d eventually end up right back where you started, having touched the entire surface of the loop along the journey.

This simple creation, the Möbius strip, is fundamental to the entire field of topology and serves as a quintessential example of various mathematical principles.

One of these principles is non-orientability, which is the inability for mathematicians to assign coordinates to an object, say up or down, or side to side. This principle has some interesting outcomes, as scientists aren’t entirely sure whether the universe is orientable.

This poses a perplexing scenario: If a rocket with astronauts flew into space for long enough and then returned, assuming the universe was nonorientable, it’s possible that all the astronauts onboard would come back in reverse.

In other words, the astronauts would come back as mirror images of their former selves, completely flipped. Their hearts would be on the right rather than the left and they may be left-handed rather than right-handed.

If one of the astronauts had lost their right leg before flight, upon return, the astronaut would be missing their left leg!

This is what happens as you traverse a non-orientable surface like a Möbius strip.

While hopefully your mind is blown – at least just slightly – we need to take a step back.

What’s a Möbius strip and how can an object with such complex math be made by simply twisting a piece of paper?

THE HISTORY OF THE MOBIUS STRIP

The Möbius strip (sometimes written as “Mobius strip”) was first discovered in 1858 by a German mathematician named August Möbius while he was researching geometric theories.

While Möbius is largely credited with the discovery (hence, the name of the strip), it was nearly simultaneously discovered by a mathematician named Johann Listing. However, he held off on publishing his work, and was beaten to the punch by August Möbius.

The strip itself is defined simply as a one-sided nonorientable surface that is created by adding one half-twist to a band. Möbius strips can be any band that has an odd number of half-twists, which ultimately cause the strip to only have one side, and consequently, one edge.

Ever since its discovery, the one-sided strip has served as a fascination for artists and mathematicians. The strip even infatuated M.C. Escher, leading to his famous works, “Möbius Strip I& II”.

The discovery of the Möbius strip was also fundamental to the formation of the field of mathematical topology, the study of geometric properties that remain unchanged as an object is deformed or stretched. Topology is vital to certain areas of mathematics and physics, like differential equations and string theory.

For example, under topographical principles, a mug is actually a doughnut. Mathematician and artist Henry Segerman explains it best in a YouTube video:

PRACTICAL USES FOR THE MOBIUS STRIP

The Möbius strip is more than just great mathematical theory: It has some cool practical applications, whether as a teaching aid for more complex objects or in machinery.

For instance, since the Möbius strip is physically one-sided, using Möbius strips in conveyor belts and other applications ensures that the belt itself doesn’t get uneven wear throughout its life.

Associate professor NJ Wildberger of the School of Mathematics at the University of New South Wales, Australia, explained during a lecture series that a twist is often added to driving belts in machines, “purposefully to wear the belt out uniformly on both sides.”

The Möbius strip also may be seen in architecture, for example, the Wuchazi Bridge in China. 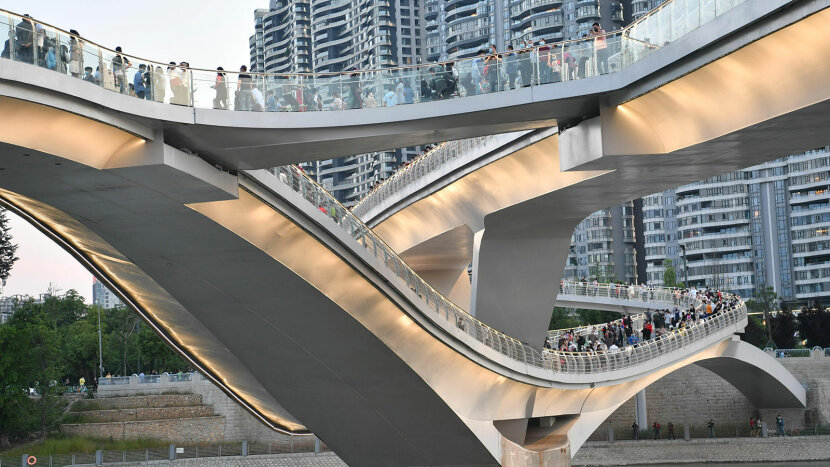 (pic) People walk on the Wuchazi Bridge, which was designed on the principle of the Möbius strip, in Chengdu, Sichuan Province of China.
Zhang Lang/China News Service via Getty Images

HOW TO  CREATE A SIMPLE MOBIUS STRIP FROM A PAPER STRIP? 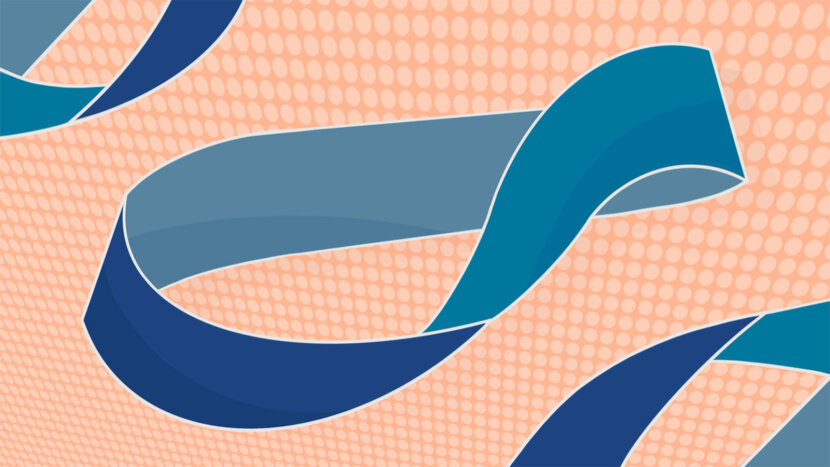 Creating a Möbius strip is incredibly easy. Simply take a piece of paper and cut it into a thin strip, say an inch or 2 wide (2.5-5 centimeters). Once you have that strip cut, simply twist one of the ends 180 degrees, or one-half twist.

Then, take some tape and connect that end to the other end, creating a ring with one-half twist inside. You’re now left with a Möbius strip!

You can best observe the principles of this shape by taking your finger and following along the sides of the strip. You’ll eventually make it all the way around the shape and find your finger back where it started.

If you cut a Möbius strip down the center, along its full length, you’re left with one larger loop with four half-twists. This leaves you with a twisted circular shape, but one that still has two sides.

If you cut a bagel along the path of a Möbius strip, you’ll be left with two connected bagel rings. Not only that, but the surface of the cut will be larger than just cutting the bagel in half, allowing you to spread more cream cheese on the bagel to eat.

Very intriguing. Mathematicians, Scientists have a very difficult task at hand because giving logical, explanations to everything is not that easy. I haven’t been to Chengdu Bridge but wonder whether people come out upside down at the other end when they go over that bridge 🙂 And the health conscious people shouldn’t cut the bagel along the path of Mobius Strip 🙂

It appears that the bridge in China is so long with gradual ‘mobius twist’ as they walk… holding hand railings from one end to the other and then back to the beginning. They do turn upside down and then stand erect again… the way they started out, holding on to the railings!

Rudakov’s Stories of 72 Words Each Writer: Sergei Nosov Translated from Russian by A. Charumati Ramdas   Seventh Digit Lucky…She, definitely, didn’t eat them, as strictly required by law, but always displayed them – every tram-ticket went through verification. Did it mechanically: before dumping the ticket into purse, added the first three and the…

Baba Ka Dhabha Last fortnight a video depicting the plight of an elderly couple who used to scrape a living by running a wayside Dhabha at Malviya Nagar had gone viral on Whatsapp. It showed how badly the lockdown had effected their business. The poor couple had run out of all their savings in the…

Folks, this is outstanding success for COVAXIN innovation by a totally Indian company, Bharat Biotech (Hq., Hyderabad) The Drugs and Comptroller General of India (DCGI) has reportedly approved the administration of Bharat Biotech’s Covaxin to children in the 2-18 years age group. According to news agency ANI, the Subject Expert Committee (SEC) has given the…

Sardar Sohan Singh and his family had shifted to Chandigarh. Suddenly, I had lost two close friends. Loss of company of Goga hurt me because suddenly my daredevilry and my pranks had come to a standstill because one needs a partner in such escapades. Anyone who has read the books of childhood adventures will vouch…

After Joseph (Joe) Biden became President of US in January ’21 (winning a photo finish race for ‘White House’ beating former President Donald Trump,) this is the first time PM Modi of India is making a 3-day visit to US… visiting Washington DC for one-on-one meetings with President Biden, VP Kamala Harris… also heads of…