Jageshwar group of temples in Uttarakhand

Cooped inside the four walls for more than a year I miss our Uttarakhand trips a lot. Seasons of snow, clouds, sun-shine continue to slip one by one and I am unable to enjoy the serenity of our favourite mountains. So, I just started re-living our trips. This one is from our trip to Uttarakhand during March 2015

As we approached the gate of the enclosure inside which stands the cluster of Jageshwar group of temple, we could hear the Sholakas, mantras echoing in the premises. A family was conducting pooja in Mahamrityunjay temple. Mahamrityunjay temple is  the oldest and the biggest one in the group. Stately Devdars on the other side of the river gliding behind the temples stood silent and meditative. Dotted with many Nagara styles of temples of different sizes, the place enticed me to travel into the era long back. Why so many shrines were erected in such a small area? The temples are said to be erected between 8th to 18th century i. e. from Katyuri king’s time to Chand dynasty period. Did different kings built different temples to pay homage to God? Did they get it built for fulfillment of their wishes or to commemorate their victory in any battle? Did any of them got erected any of the temples as penance? These Devdars, the river, the mountains…are they witness to the those times? So many questions rushed through my mind but none of them lasted more than a second. They evaporated sooner than they were generated. Such was the magical impact of the tranquility spread all around that all thoughts and curiosity vanished and calmness spread within.
There are about 123 temples in the cluster and every shrine has a shivlinga inside it. Though the stone plaques in front of some temples displayed the names of Surya temple, Navgrah temple but these too looked like other temples. Some of the statues found here are now kept in the museum at Jageshwar. The museum has two galleries and some rare sculptures are displayed here. The temple of Navdurga and Pushtidevi were locked at the time we visited so could not see them from inside. 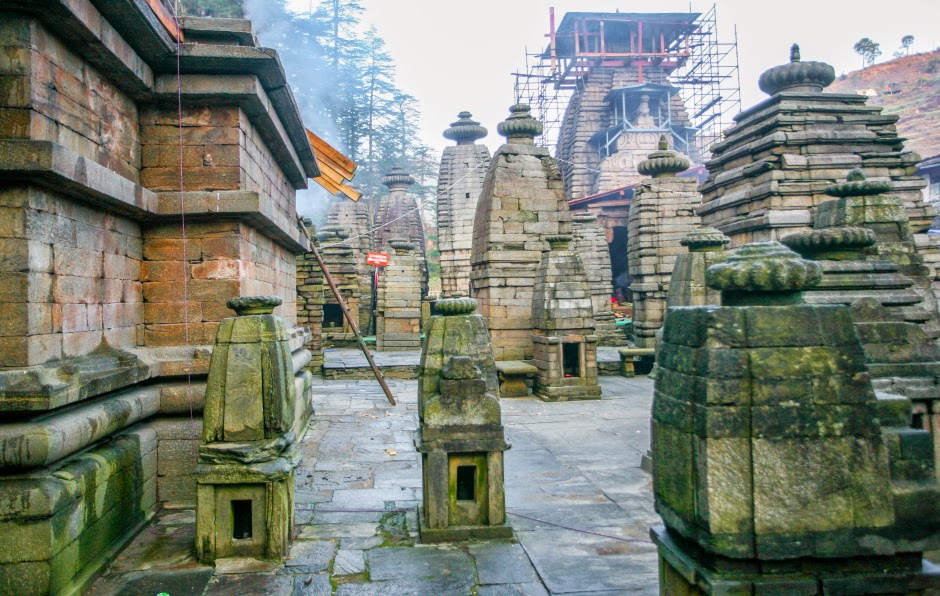 Bal jageshwara/ Tarun Jageshwar temple in the premises is considered to be one of the 12 Jyotirlingas.

In the above shloka mentioning all the jyotirlingas, the eigth one— Nagesham Darukavane is said to be referring to Nageshwar/ bal jageshwar at present day Jageshwar in Almora district of Uttarakhand. Darukavane means forest of devdar and the dense forest  of devdars around the temples justifies the explanation.

This temple faces west. Outside the entrance on either side are two well sculpted images of dwarpals Nandi and Skandi with all their arms and armaments. 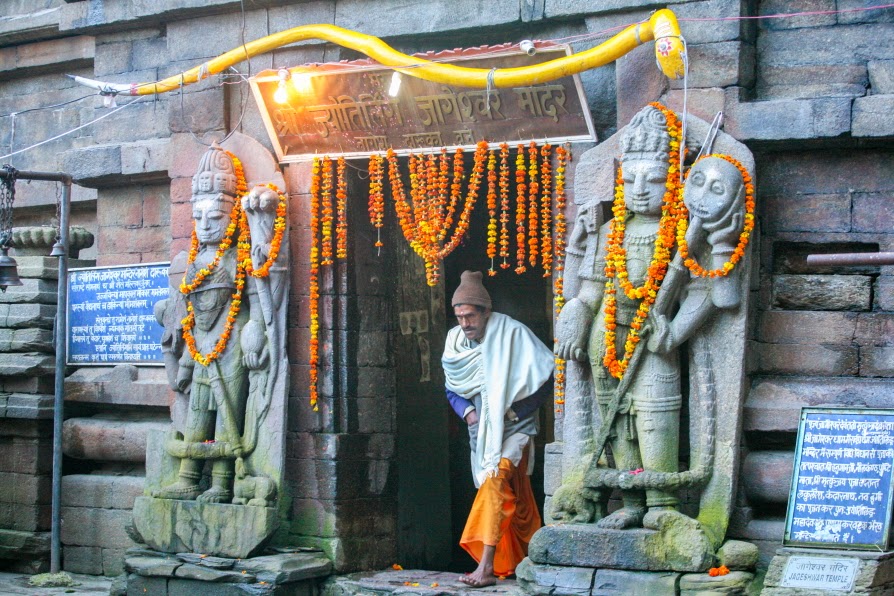 The Shivling in the sanctum sanctorum is swayambhoo and appears to be divided in two parts.  The larger part depicts Lord Shiva while the smaller one devi Parvati.  There are two Ashtdhatu statues of Chand kings Deepchand And Tripal Chand in standing posture behind the Shivlinga. There is a burning light[jyoti] in cupped hands of the statue of King Deepchand, reputed to be burning  incessantly from times immemorial. 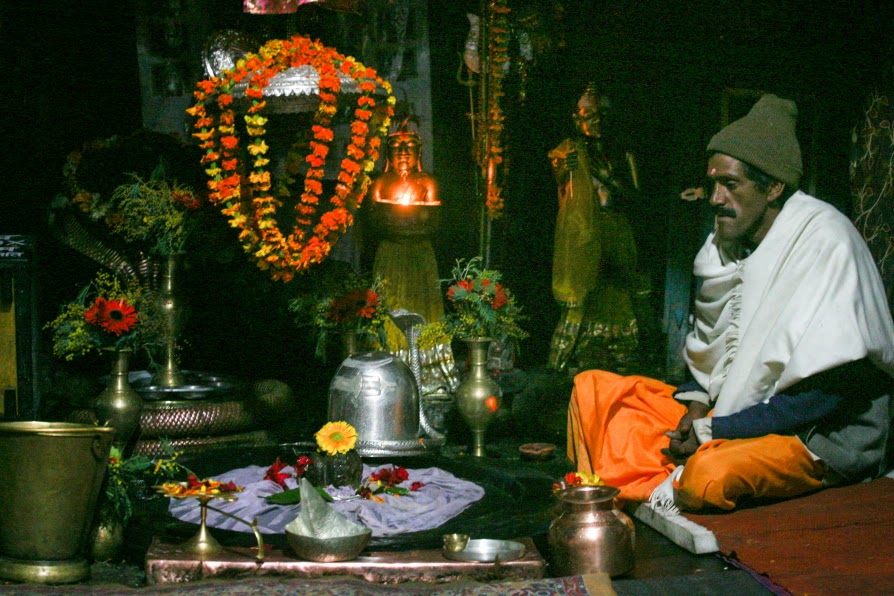 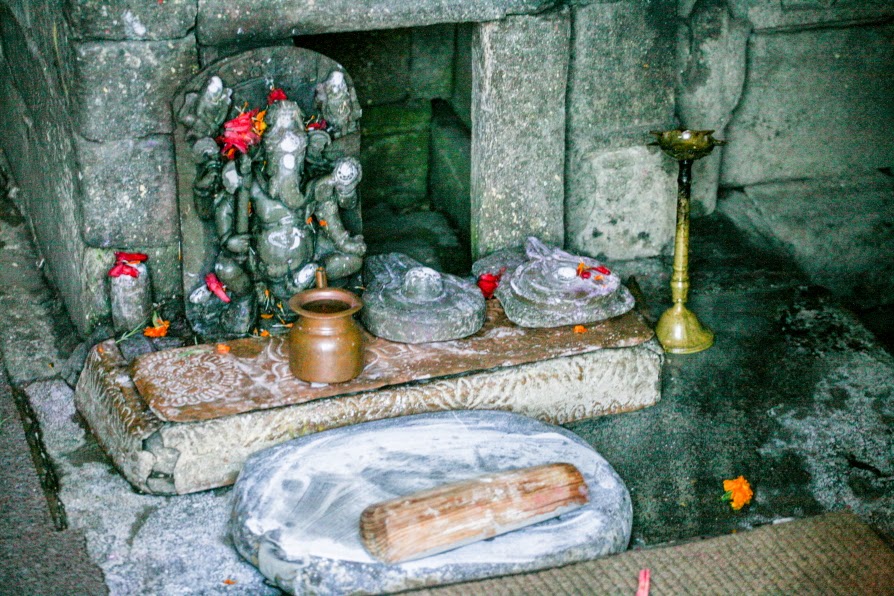 Mahamrityunjay temple is perhaps the only temple of Shiva called by this particular name. As is evident from the name devotees come here to perform the life saving pooja. This is east facing temple and the unique Linga here has an eye shaped opening. God here is worshiped as savior from death. Chanting of mantras and their reverberation leave a very powerful impact. 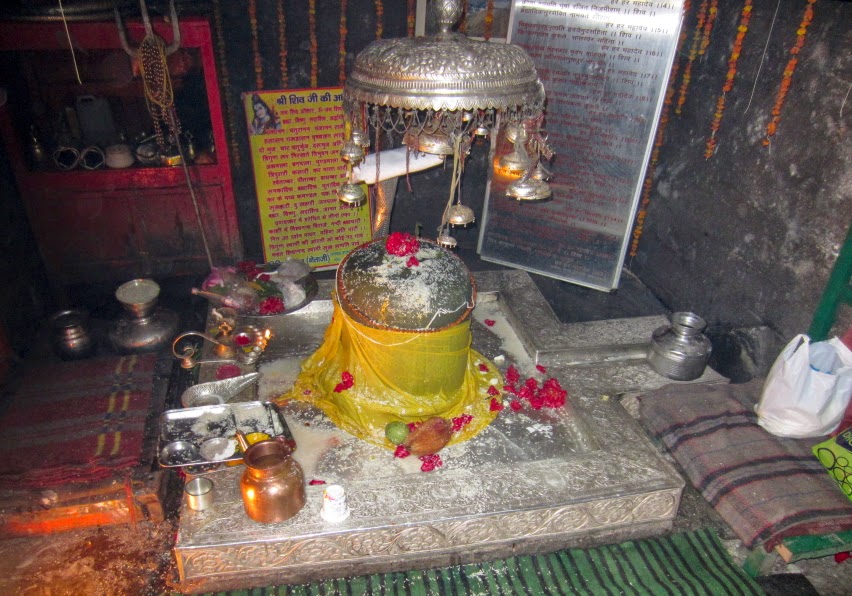 Almost all the temples have carved stone gate with images of dwarpals on both sides. On the shikharas of temples various images of Gods, mainly Shiva with ganas are etched. 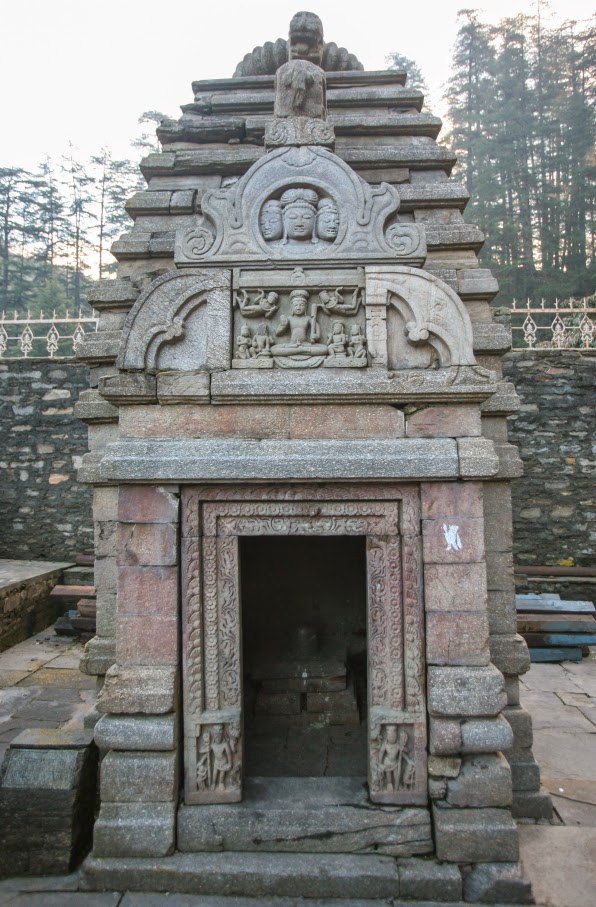 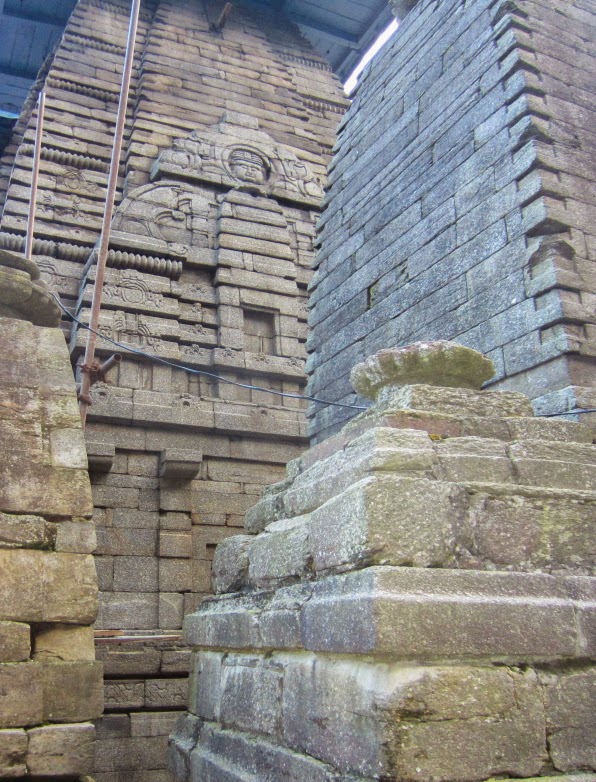 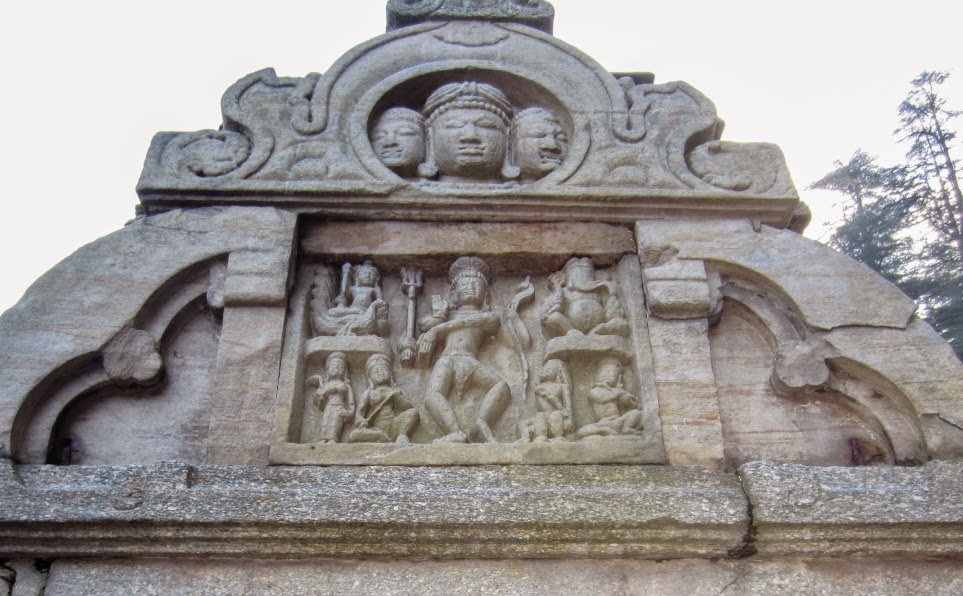 The temple has an interesting legend attached to it. It is believed that Lord Shiva had come to this site for meditation. So when the women folk of the village came to know that  a young yogi with haloing aura  has come to meditate, they all gathered to catch a glimpse of him, making the men folk infuriated and to control the situation Shiva converted himself into a child and since then he is worshipped  here in his child avatar.

Many years ago Jageshwar used to be a pilgrim halt enroute to  famous Kailash Mansarovar yatra. It is also said that Adi Shankaracharya stayed here and worked towards restoration of the temples before moving towards Kedarnath.

Though normally in the month of march it is not very cold in the valley but this year weather showed different patterns of  mood. We were told that till a week ago the road to the temple was covered with snow.  Thunderous rain and hailstorm two days ago too contributed in  bringing the temperature considerably down. It was very early in the morning. The sand stone floor of temple premises was bitingly cold. The carpets spread to make pradikshna easier for devotees were drenched with the moisture, water literally oozing out. 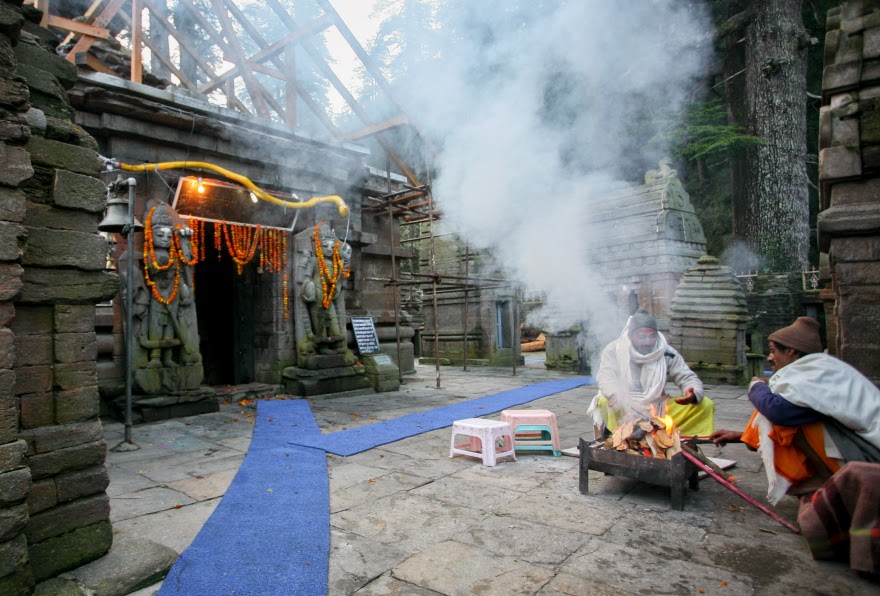 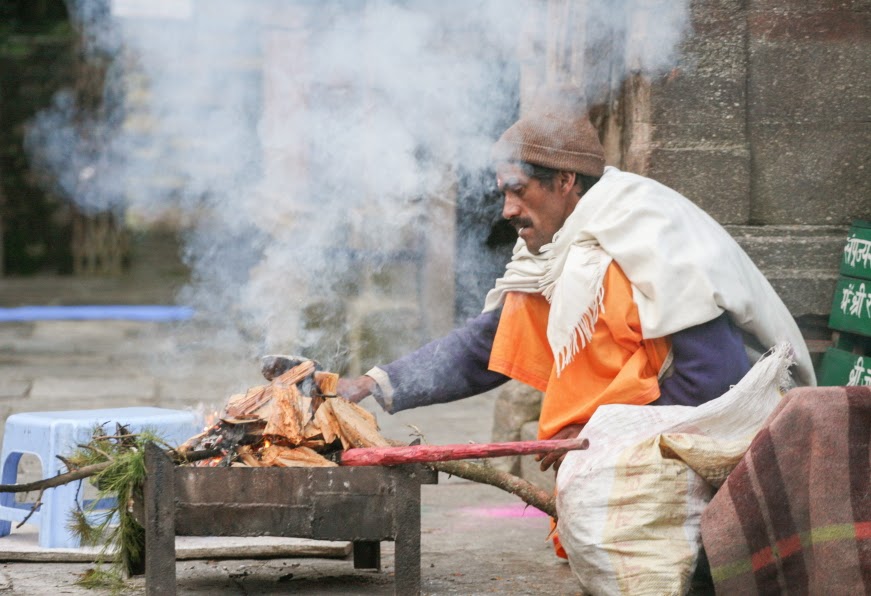 .
Logs burnt in open courtyard. One  pujari sat near it. Yellow, orange flames leapt and danced in air. Harmonious echo of chanting of prayers, blowing of conch, peeling of bells, murmuring of river Jat ganga transported me in a trance like state. Rising column of smoke as if invited to accompany it to the mystique horizons.The Devdars around the temples stood close giving ample shade to let the silky , tender blades of green grass flourish while few sunrays haltingly stepped in to kiss the glistening dew drops and droplets on leaves and grass.
If at all the moments could be frozen…………………. 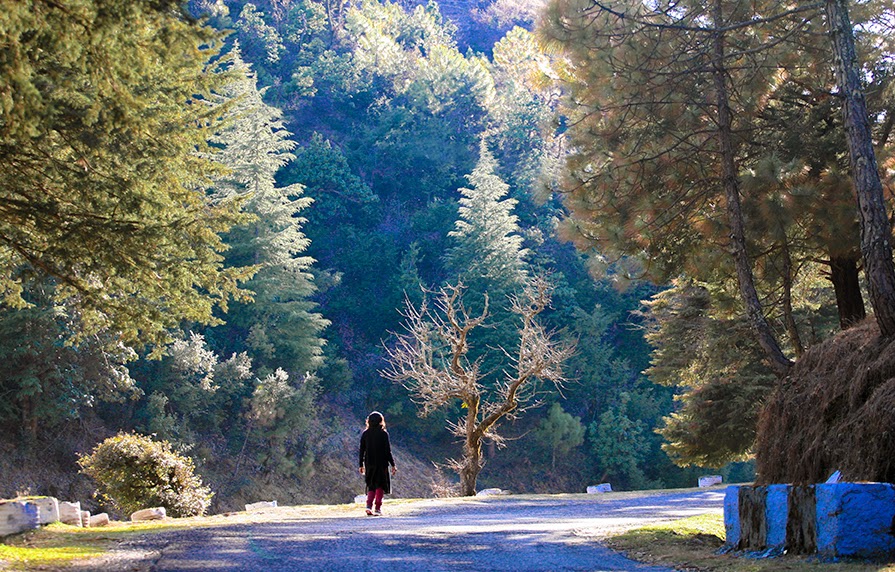 All the pictures by sunder Iyer.

Dear Namita
Lovely to read and see the images ( again).
Yes..I can relate to your longing to be on the road visiting these Temples. The pandemic has restricted all our movements and we live in memory of all those places and the unusual people we met in some of the Temples.
How terrible life has become! But at least we have hope.
Lovely images as usual..
The small shrines inside reminds me of the Pancha Rama Kshetras we visited in Andhra..and in particular the Temple at Draksharam (All five were Temples dedicated to Lord Shiva must called as Pancharama Kshetras)where the priest was such a divine and erudite being.
The miniature Temples with small Lingas inside and the Priest ( we were in touch wig him for a long time,. he was called Suresh) had strange history. At least the Priest had something strange to tell us.
He said that MAN IS SHRINKING IN SIZE…AS TIME GOES. WITH THE SHRINKING OF DHARMA, MAN WILL BECOME SHORTER TOO. HE WILL BECOME SO SHORT AT THE END OF KALI YUGA AND THE SMALL TEMPLES HAVE BEEN BUILT FOR THE MINIONS THAT HUMANS ARE GOING TO BECOME !!!It is rather scary !!!
One will have to go up the ladder to see the Garbhagrihas that we all visit now:))))

Hello Usha, Yes, we must be thankful for the hope and we will keep it nurturing. That definitely is a very interesting and strange, but then Usha, come to think of it, if we keep aside the physical form, human beings are definitely shrinking as far as virtues, morals are concerned. May be it’s something symbolical that The Supreme Power would be out of our reach if we go on down sliding in the self designed path of greed and vices.
I and Sunder often discuss that once things improve we will go on visiting places state wise, various holy places big and small. Till then let us relive and share our soul enriching experiences.

Thanks a lot, Bro. I too was under the same impression that Nageshwar Jyotirlinga is in Gujarat and at many places it is maintained so there in Jageshwar temple, I was told that Darukavan in the Shloka refers to dense forest of stately Devdar trees around the temple and the Bal Shiva temple is one of the Jyotirlinga. Same confusion sometimes arise about Ghirnshwar temple near Ellora caves. But you are right, in most of the places Nageshwar temple at Dwarika is referred as one of the Jyotirlinga. Kedarnath is definitely one of the jyotiralinga, the highest one.Jageshwar group of temples with backdrop of Devdars is one of most serene place of Uttarakhand. Though commercialisation due to increasing tourist footfalls is gradually eating into the quiet and ethereal aura of the place. A temple of Shiva known as Mahamrityunjayeshwar I found among this group of temple only. It is so good to get connected.

Thanks a lot, Navneet. You are right that restriction was much needed. I know the popular tourist destinations must have heaved a sigh of relief. Those place got much needed time to take rest and remember fondly their good old days. We have not been very responsible tourists or for that matter responsible inhabitants of a beautiful planet.

Beautiful writeup. India is a land of temples and the Himalayas are called Dev Bhoomi for nothing. One can really sense the presence of God everywhere. It’s sad that Covid-19 has severely restricted the movement of us all, but sometimes I think that perhaps it was necessary for restoring some quiet to the chaos that we humans had created on this globe.

Rudakov’s Stories of 72 Words Each Writer: Sergei Nosov Translated from Russian by A. Charumati Ramdas   Seventh Digit Lucky…She, definitely, didn’t eat them, as strictly required by law, but always displayed them – every tram-ticket went through verification. Did it mechanically: before dumping the ticket into purse, added the first three and the…

[Aunt Dahlia to Bertie Wooster] ‘To look at you, one would think you were just an ordinary sort of amiable idiot–certifiable, perhaps, but quite harmless. Yet, in reality, you are worse as scourge than the Black Death. I tell you, Bertie, when I contemplate you I seem to come up against all the underlying sorrow…

Guarded by 25000 Armed Home Guards, amidst pomp and pageantry of a ceremonial pipe band, President Joe Biden finally walked the last 200 feet on Pennsylvania Avenue in Washington DC, accompanied by his immediate family, and, entered White House through the front gates on a chilly, windy day of January 20th. Previously, after brief prayer…

Countries over the world are measured on various scales by different institutions. Some measurements are done by institutions within the country while some by outside the country. Per capita income or how much an average citizen earns is collected and published by the country. While some measures like ease of doing business or gender inequality…