Does Your Brain Get Tired Like the Rest of Your Body? 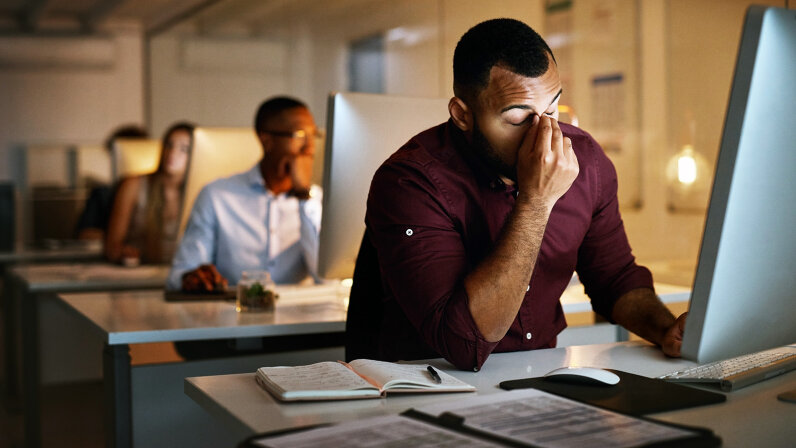 (pic) Who hasn’t felt brain drain after a stressful day at the office? PeopleImages/Getty Images

Who among us has not experienced mental fatigue after working a long day, taking finals or driving the kids from school to numerous extracurricular activities? When this type of “brain drain” sets in, regardless of how hard you try to concentrate, you probably find yourself physically exhausted and unable to fully focus.

Is this kind of mental fatigue evidence that you’ve overworked your brain? Meaning, does your brain actually get tired in the same way your other muscles do? And is there any difference between mental fatigue and good old exhaustion?

While the answers to these questions involve some complex chemical science, luckily there are ways to get a handle on mental fatigue before it leads to burnout, and those are easy enough for anybody to understand.

So let’s get this out of the way first. Your brain is technically an organ, not a muscle. It does have a bit of muscle tissue, but for the most part it’s mostly fat. In the brain, electrical cells called neurons transmit messages via chemicals. Although the brain isn’t a muscle, its cells do use energy to function.

“The brain requires fuel and energy,” says Gary Figiel, M.D., a geriatric psychiatrist in Atlanta who specializes in neurology and psychiatry. “The brain uses glucose as the primary source of energy.” When glucose enters the brain’s cells, it gets turned into adenosine triphosphate (ATP), a complex organic chemical for storing and transferring energy in cells, by the mitochondria.

It’s the compound ATP that researchers from Australia and Belgium thought could be the key to brain drain. The idea was that when your brain works hard, it uses up all that glucose, leaving you feeling depleted. The lowered glucose levels then raise levels of ATP, which blocks dopamine — that chemical that makes you feel good and keeps you motivated.

The study, which was published in the journal Sports Medicine in 2018, concluded that when your brain can’t get enough dopamine, you’re less likely to stay on task. So even though your brain is not a muscle, chemically you can tire it out by thinking too much.

“We are not wired to use the ‘higher order executive function’ all the time,” says Melanie Greenberg, Ph.D., clinical psychologist in the Bay Area, California, and author of “The Stress Proof Brain.” While “higher order executive function” can include obvious tasks like taking the LSAT, it can also comprise a combination of smaller challenges, like processing a lot of new information coming at you at once.

“After a while, our brains automate things and take less energy,” Greenberg says. For example, if you drive the same way to work every day, that activity will use less brain energy than if you had to constantly find new routes. When your brain is dealing with an ongoing supply of new information, it must put energy into every decision, which overuses that executive function and can cause mental fatigue.

Excellent scientific explanation. Hitherto, I thought the best way to keep the brain healthy is to exercise it by doing crosswords, sudoku, word games like word crossy and playing bridge. Now that you say there is a small muscle in the brain, I realize I have been wasting my time. What do you suggest to keep my brain ticking? Mind you, I am 81 plus.

Ramarao garu… at your and my age, we need to replenish glucose loss in body; suggest taking glucose water twice or thrice a day… glucose powder is available in US, add it to water and drink. Also view information for senior citizens issued from time to time by subscribing to: https://www.medicalnewstoday.com/articles/159442

There is a lot of scientific jargon to make one understand what really happens, but 1. One has to be physically fit, rested enough, to get the best out of his brain. Maybe, the repetitious work cause mental fatigue or disinterest but productivity of brain may still be there. On the other hand when one is physically tired a bar of chocolate or an injection of glucose may not set him ready for solving complex equations, but a walking in the fresh air and a good sleep may do him a lot good.

You said, One has to be physically fit, rested enough, to get the best out of his brain. Maybe, the repetitious work cause mental fatigue or disinterest but productivity of brain may still be there…” REPETITIOUS WORK CAUSES MENTAL FATIGUE.

Physical fitness and Mental fatigue (Brain fog) are two different things. A good sleep can restore physical fatigue but does it really cure mental fatigue? This the question that is currently under the radar of neuro scientists.

A lot of research is underway on “brain fog”. Like you say, A bar of dark chocolate or glucose injection or even 2 pm coffee as stimulant and morning walk to get fresh breeze MAY NOT REFRESH THE BRAIN OR RESTORE LACK OF MOTIVATION. But all of that can refresh you physically and may relieve body/muscle pain.

“Brain fog” is more than just a passing feeling in the afternoon or early morning — it’s an actual medical condition that can start as early as your late teens. The term is actually referring to changes in brain function over time. Symptoms can include fatigue, confusion, lack of concentration, sleeping issues, forgetfulness, and headaches.

Maybe it is. Perhaps the people who do such work that requires serious mental activity will know the difference. From writers point of view, I can say that yes, at times one doesn’t feel up to it and at time the quality of what you produce doesn’t measure up to your own standards, but being physically fit is a precondition to this.
Symptoms can include fatigue, confusion, lack of concentration, sleeping issues, forgetfulness, and headaches…have heard about such things, but perhaps they occur when one is living a constantly stressed life

Your brain is technically an organ, not a muscle. It does have a bit of muscle tissue, but for the most part it’s mostly fat. In the brain, electrical cells called neurons transmit messages via chemicals.

Although the brain isn’t a muscle, its cells do use energy to function and as mentioned in this blog, neurology MD Gary Figiel of USA and other independent researchers in Australia and Belgium think that the formation of ATP (adenosine triphosphate, ) a chemical compound that “forms when glucose levels drop”could be the key to brain drain.”

The idea was that when your brain works hard, it uses up all that glucose, leaving you feeling depleted. The lowered glucose (much needed to increase ones energy levels) raises levels of ATP, which blocks ‘dopamine’, the chemical that makes you feel good and keeps you motivated. It is thought that blocking ‘dopamine’ causes ‘brain fog”.

Consuming of a bit of dark chocolate when one is tired or taking a walk in a calm environment, particularly just before sun rise, is also thought to increase ‘dopamine levels in the brain’ keeps us motivated!

In one of his lectures on “Ageless Body, Timeless Mind” he thought that, “increase of dopamine levels during ‘tapas’ (linkage of body, mind, soul and spirit by the rishis) could have motivated ancient rishis of India to think of profound philosophical and scientific thoughts” resulting in the ‘VEDAS’.”

A simple act of not removing drained battery cell(s) immediately from a digital ‘clock or watch’, after the mechanism stops working, could result in drainage of ‘left over electrical energy’ of the ‘battery’ to surrounding copper/silver/zinc/aluminium parts of the mechanism. Phosphates of metals that form in this process stops free flow of electrons and electrical current that the battery was capable of previously… providing end to end connectivity through flow of electrons in the mechanism.

This could result in throwing away of the mechanism itself instead of the ‘drained out battery cells’ from digital clocks and watches!

This is analogous to formation of ATP (adenosine triphosphate,) in the brain resulting in ‘brain clogging’ when the much needed glucose energy is used up!

President Donald Trump and First Lady Melania Trump have tested positive for Corona Virus. They both have been quarantined separately. President Trump is at Walter Reed Medical Center, where he will spend “the next few days.”  Trump has had a fever since this morning, a source said. He received a dose of the experimental Regeneron…

© Shutterstock.com for illustrative purposes. Carla Mozée – Writes in Business Insider (India)  The euro (shared European currency in many countries of Europe) has slipped to its lowest level against the US dollar since 2017 after Russia suspended gas shipments to parts of Europe, highlighting concerns that euro-area ties to Russia will hurt its economic growth. More on this…

Today I will take you to, yet another Shiva abode located amidst the serene hills of Uttarakhand but this one is totally different from the groups of temples I had talked about hitherto. And I fore warn that this is going to be a long post. We visited Patal Bhuvneshwar in 2002. The place might…

How to be Happy always

I have found the following very useful to be happy. (1) I catch up with my classmates of school, college, and old colleagues and students. I talk somewhere between 15 minutes to almost one hour each to at least five of them daily. When we talk, we revive our old memories. We go back in…