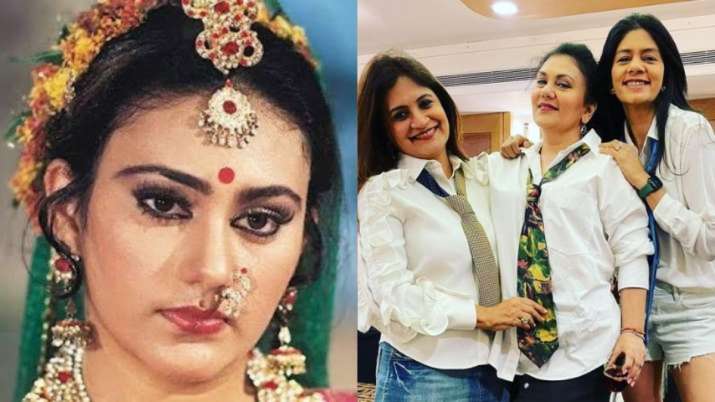 Ramayan’s Sita aka Dipika Chikhlia happens to be one of the most active celebrities on social media. She is now a mother of two children, happily married to a businessman.

Taking to the photo-sharing application on Sunday (May 22), Dipika Chikhlia (who played the role of Sita in the legendary RAMAYAN TV series in Hindi language series…) posted a set of pictures with her friends in which she was seen wearing a white shirt, skirt, sneakers and a necktie.

In the 1980s, Ramayan TV series were the most popular entertainment on small screens in India and in many countries around the world.

Many house holds watched RAMAYAN, a wholesome family entertainment. Entire families (from grand parents to grand children,) would remain home glued to the TV, when Ramayan episodes were broadcast on TV.

These TV serials were directed by Ramanand Sagar, remained the most popular TV drama series for over 1-1/2 years; they were on the small screen in most homes watching HINDI serials from January 25, 1987, to July 31, 1988.

The TV shows returned during the course of the COVID-19 lockdown and broke many TRP records. The series featured Arun Govil as Bhagwaan Ram, Deepika Chikhalia as Mata Sita and Sunil Lahri as Lakshman, late Dara Singh as Lord Hanuman and late Arvind Trivedi in the role of Ravana.

ONE CAN VIEW ON YOUTUBE, SOME EPISODES OF RAMANAND SAGAR’S ‘RAMAYAN’ SERIES

What the people have found objectionable is the picture in which she can be seen holding a glass of wine. Since it is a wine glass and from her looks it doesn’t seem that she could be having coke or pepsi. She isn’t a Sita incarnate and has every right of living her life the way she chooses to, but the Indian viewers are very touchy.

Yes; Indian viewers do not seem to understand that she is a popular actor and has a life too.

Fire is one of the fearsome enemies of the sailors. Although the ships are equipped with full gear for fighting fire and it is kept in state of readiness, and the ship’s crew is trained to handle the fire, yet the fires on ships occur at frightening regularity. Regular drills are carried to keep the…

(image) People attend the PUBG Global Invitational 2018, the first official e-sports tournament for the computer game PlayerUnknown’s Battlegrounds in Berlin, on July 26, 2018. (Representative image/REUTERS) The invitation had been given by a marketing Co for China developers in Berlin Germany. The Government of India  banned 118 Chinese mobile apps, including the popular game…

A RE-WRITE FROM A PUBLICATION BY Dr TREVOR ENGLISH  Mobius Strips: So Simple to Create, So Hard to Fathom (pic) Möbius strips are both simple and mystifying at the same time. Dimitri Otis/Getty Images The mathematics of otherwise simple-looking objects can be surprisingly perplexing. There’s likely no greater example of this than the Möbius strip.…

TESLA, US EV-MAKER, WELCOME TO MAKE CARS IN INDIA

Union Minister Nitin Gadkari says, Tesla, the US Electric Vehicles maker, is welcome to invest in India. Gadkari says it can find partners and markets in India if it can invest in India under India PM’s ‘Make in India’ initiative. Tesla uses two different types of electric motors in their cars. The AC induction motor…

RUSSIA WANTS TO CONTROL NATURAL RESOURCES OF UKRAINE TO SPEED UP RUSSIAN ECONOMY (pic) Kyiv and Ukraine (yellow color) Map shows other EU countries that surround Ukraine. To South East of Ukraine is Black sea (shown here in blue color.)  Russia is at North East of Ukraine. Image is courtesy, www.alamy.com Russia does not want…