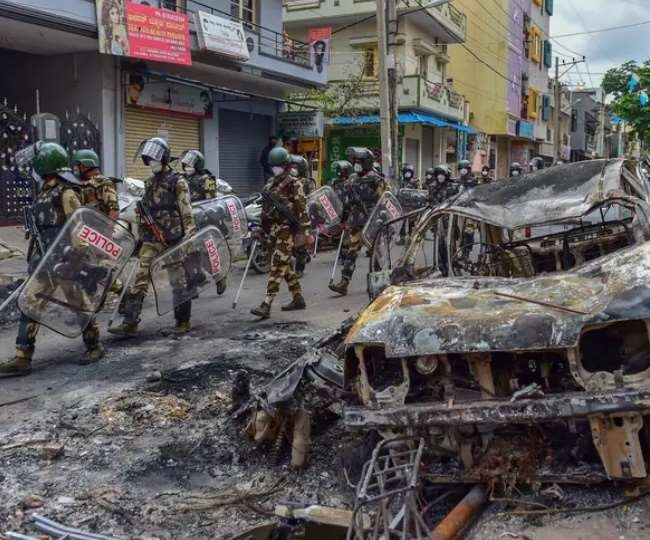 (pic-1) Riot torn KG Halli (a minority stronghold.) Hundreds of vehicles were burnt, 2 police stations and an MLA’s house were burnt down too.

Note: ‘DH photos’ have copyrights on picture above. 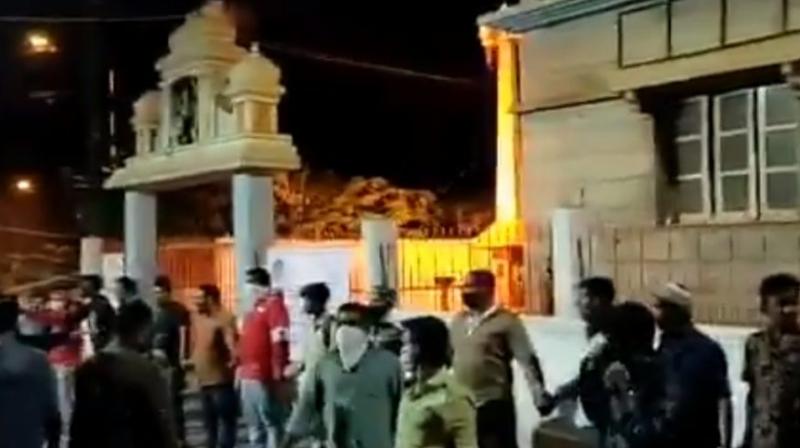 Note: ‘DH photos’ have copyrights on picture above.

As many as 33 government and 109 private vehicles were completely burnt or extensively damaged in KG Halli Riots by miscreants chanting Islamic religion slogans on August 11.

The State government of Karnataka has filed a writ petition on August-12,  before the Karnataka High Court seeking appointment of a claims commissioner for recovery of damages from the arrested miscreants in police custody now. Over 380 rioters have been arrested; leaders who lead the riots and incited rioters are alleged to be members of a political party known as SDPI with links to PFI of Kerala or Tamil nadu. Some of them have been identified over CCTV cameras in area.

What was the reason for this sudden eruption of minority outrage? Allegedly, it was a derogatory post by the nephew of a Congress party MLA, on his (poster’s) facebook wall on ‘The Prophet’ worshipped in Islam religion. The facebook poster is in police custody; he claims he did it in retaliation against a derogatory post by a Muslim youth on Ram Mandir ‘being built’ in Ayodhya. His facebook post was removed almost immediately by the facebook authorities in India.

Supreme Court (SC) of India has awarded the Ram Mandir land recently to Hindu outfits for building of a new Ram Mandir there, after the related land dispute went on for over the last 100 years including Ram Janmabhoomi and Babri Masjid destruction in Ayodhya. The Supreme Court (SC) of India has awarded land nearby in Ayodhya as compensation to claims by Muslim land owner(s) at the settled Ram Mandir dispute area for building of a new Masjid. The actual land owner(s) who held title to property in the Ram Mandir area in Ayodhya have accepted the SC verdict without any reservations.

* (Shadows of Charlie Hebdo shooting incident in France, playing in Bengaluru, the high-tech capital of India!)

Karnataka government has called in National Security Agency (NSA) for investigations. Karnataka government says leaders who fueled the violent riots in Bengaluru belong to a political party known as the Social Democratic Party of India (SDPI) which is, allegedly, the political arm of radical PFI party operating in Kerala & a few other States of India.

The investigation into the August 11 Bengaluru riots case has revealed that several accused reportedly have links to accused in Church street blast and other cases of communal attacks in the past. According to a report by the News 18, a total of 40 accused have been found to have links with persons accused in Church Street blast, Malleswaram bomb blast and other cases related to communal attacks.

At least three people were killed and over 60 police personnel were severely injured in the communal riots in Bengaluru on August 11. Stone pelting, use of petrol bombs and  lethal weapons are likely the reason for police injuries and public property destruction.

Police have arrested 380 people in this connection. Several FIRs filed; however, Police are yet to charge sheet the anarchists and take them to court.

Karnataka government has announced compensation to the 3 persons killed in police firing to control the mob who attacked the  police, burnt 2 police stations and destroyed a lot of public property.

One of the arrested people, Samiuddin, who claims to be a social worker was in touch with the prime accused in the 2016 Rudresh murder.  Rudresh was an RSS worker and was killed in 2016. According to the report, Samiuddin knew the accused in the RSS worker’s murder case and even visited him in jail.

Karnataka Police, NSA authorities are continuing the investigations on BENGALURU RIOTS of August-11.

*Charlie Hebdo shooting: Series of terrorist attacks that shook France in January 2015, claiming the lives of 17 people, including 11 journalists and security personnel at the Paris offices of Charlie Hebdo, a satiric magazine. The deadly violence focused attention on the threat posed by militant Islam, but the response to the attacks by the French was generally one of solidarity rather than reprisal.

Mellowed out and enlightened septuagenarian. Tech savvy. Social writing is just a pastime to kill time. I keep contributing to several developmental projects in the area of engineering education, IT and Healthcare projects launched by my kith and kin. I am too lazy to write a book, 'cause I think my life itself is a book! I am also at www.facebook.com/sureshnrao
Login
Please login to comment
7 Comments
Newest
Oldest Most Voted
Inline Feedbacks
View all comments

The Vishwa Hindu Parishad (VHP) on Thursday backed the BJP government’s move to act against rioters involved in the recent violence in Bengaluru’s KG Halli, DJ Halli and Kaval Byrasandra. “It is a good thing the state government has taken strict acti…

What does that mean? Is it not the actual shot of a protest? In these days, nothing can be believed. For the sake of giving weightage to a news a fake picture can be inserted or a morphed picture or doctored video can be made, while sitting at the work desk, so what to believe? For highlighting the plight of the migrants, I read and you too must have read that images of some kids in Pakistan and some Rohingiyas too were pushed in. There is no way to stop these people as The Right to Free Speech is used as a shield. Even Prashant Bhushan is using this for taking on the SC. How to separate grain from Chaff? Freedom of expression doesn’t mean a license to work on breaking up the country. Even America is not so tolerant as India is or should I say that the authorities develop cold feet while taking action against the instigators as the leads take them to the doors of the political masters.

The actual shot by ANI photographers of the protest against building the Ram Temple perhaps identified some people who were part of militant Islam. It was withdrawn by the publishers… most likely for reason… that the picture could fuel more communal violence! So, ANI published a morphed picture, replacing the original picture, hoping it will convey the message! ‘Representative pics’ that show up on internet are just that!

Freedom of expression, right to free speech etc have their negative consequences today. Yes, I’m reading about Aam Aadmi party lawyer Prashant Bhushan and his tweets against Judiciary itself… looks like he is crossing the Laxman Rekha. While one can criticise a judgement one cannot criticise a Judge and his/her credentials and authority to give a judgement. Hope he gets the punishment that fits his public tweets. Btw, he quotes father of the nation, M.K.Gandhi, to justify his tweets! Prashanth Bhushan thinks there is British Raj even now in India!

Latest news on Prashanth Bhushan Tweets: The Supreme Court, on Tuesday, reserved its judgement in the 2020 suo motu criminal contempt case against lawyer Prashant Bhushan after he refused to apologise for his tweets.

I just read that. His obduracy has reached a limit. He thinks he will come of as a hero or a martyr but I think, he should be given a befitting punishment to shut out any further abuse of this so called ‘privilege of speech’.

If I am not mistaken there was a new item in the newspapers of an imminent attack by ISIS in South India a few days before this incident. Why was NSA or concerned authorities not on the alert. That post by that teenager might have triggered the fuse, but the arson and violence of the scale that we saw, couldn’t have come without meticulous planning and preparation that may have gone on for months. If this has happened once, there must be out there, those instigators, piling up arms and ammunition for another act like this somewhere else. I don’t know how many of those who are behind bars are the actual perpetrators. A look at he women holding placards in 3rd picture one can say that they look like some paid, illiterate, uninformed women and there are definitely some serious and dangerous groups behind this incident which has come almost on the heels of the Delhi incident and all this doesn’t bode well for India which is planning to take advantage of new businesses coming in her kitty as a fall out of anti-China sentiment because of Covid-19.

Pic-3, is a representational image by Asian News International. ANI is Asia’s Premier News Agency. The actual photo that resembled this picture was removed by the agency. Asian News International (ANI) is an Indian news agency based in R.K Puram, New Delhi that offers syndicated multimedia news feed to plethora of news-bureaus in India and beyond. Established by Prem Prakash, it was the first agency in India to syndicate video news and as of 2019, is the biggest news agency in India.

Service to the Society

Time and again the world moves on by the contributions by noble services. Here we have to acknowledge & highlight them for helping the poor.  Hundreds of billionaires pledged to give their fortunes away through Warren Buffett and Bill Gates’ Giving Pledge, but very little money may be actually helping people, according to a new…

Going To The Dogs

Ever since the death of Sushant Singh Rajput the Social media is on fire. Although the issues being discussed on Indian Social media are always supposedly the burning issues, which means bashing Hindutava, communal violence and criticizing government, but once in a while like now, if there’s an issue involving Bollywood celebrities, then discussing it…

As of Dec-7, Trump still persuing legal options in Wisconsin to delare Biden’s win was not legitimate!

Donald Trump’s efforts to take legal action over the election result haven’t proved very successful so far, but he’s nothing if not determined, as his administration is now suing Joe Biden. Within a month of losing the election, the sitting president had filed 33 lawsuits arguing that Biden’s win wasn’t legitimate. Trump has spouted unfounded…

ON THIS ‘BHARATH BUNDH’ day (Dec 8th) by Indian Farmers to protest against the 3 Farm Bills recently made into law by the Union Government, the Indian Railways announced that some of the goods carrying Rail Coaches recently modified as COVID CARE CENTERS with better ventilation etc., will be converted into Rail Coaches to carry…