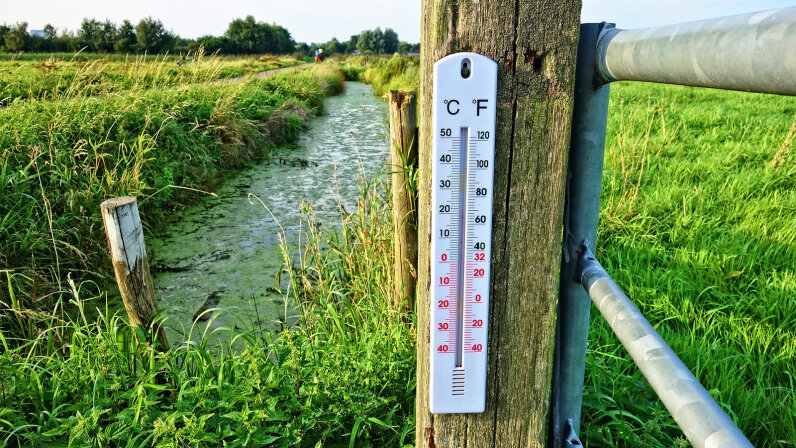 EXCERTPS  of an article by Patrick J. Kiger on CLIMATE AND WEATHER

If you’re an American and you’ve ever had a conversation with someone from another country about the weather, you’ve probably been a little confused when he or she says that the afternoon temperature is a nice 21 degrees. To you, that might sound like a chilly winter day, but to them, it’s a pleasantly warm springtime temperature.

But the U.S. and a few other American holdouts like– the Cayman Islands, the Bahamas, Belize and Palau – cling to the Fahrenheit scale, in which water freezes at 32 degrees and boils at 212 degrees.

It means that the ‘21 degrees C temperature’ that was previously mentioned as a ‘nice afternoon day’ in rest of the world is the equivalent of a ‘balmy 70 degrees F’ in the U.S ‘on a nice spring day’.

WHY THE  TWO  DIFFERENT SCALES FOR TEMPERATURE MEASUREMENT?

The persistence of Fahrenheit is one of those puzzling American idiosyncrasies, the equivalent of how the U.S. uses the word soccer to describe what the rest of the planet calls football.

Moreover, in American Football game, “the player who can run fastest to the goal post with the ball tucked away in his/her hand, chased by the opposing team, is hailed as a champion!”

Consolation is, even in ‘American Soccer’ (called ‘Football in rest of the world’)  strong legs are required, the game is an exercise for the legs.

But when it comes to temperature and whether, why is it that the US. uses a different temperature scale, and why doesn’t it not switch to be consistent with the rest of the world?

There doesn’t seem to be a logical answer, except perhaps inertia. Americans generally loathe the metric system – this 2015 poll found that just 21 percent of the public favored converting to metric measures, while 64 percent were opposed.

It might make more sense if Fahrenheit was old-school and Celsius was a modern upstart, sort of the New Coke of temperature.

But in reality, they were created only about two decades part. Fahrenheit was created by its namesake, a German scientist named Daniel Gabriel Fahrenheit, who in the early 1700s was the first to design alcohol and mercury thermometers that were both precise and consistent, so that any two of his instruments would register the same temperature reading in a given place at a given moment.

“His great mechanical skill in working glass enabled him to carry out his designs,” as Henry Carrington Bolton explained in his 1900 book, “Evolution of the Thermometer, 1592-1743.”

INVENTION OF THE FAHRENHIT SCALE

When the German Scientist, Fahrenheit, started out… the key thing that he was interested in was coming up with the same temperature reading all the time, not comparing temperatures of different things or different times of day.

But when he presented a paper on his system for measuring temperature to the Royal Society of London in 1724, he apparently realized that he had to come up with a standard temperature scale as well.

“Basically, the Fahrenheit scale was devised with zero as the coldest temperature for a mixture of ice and salt water, and the upper end was thought to be body temperature (approx. 96 degrees F), making a scale that could be progressively divided by 2,” explains Don Hillger, a research meteorologist at Colorado State University’s Cooperative Institute for Research in the Atmosphere, and also president of the U.S. Metric Association, a group that advocates conversion to the metric system.

“This resulted in the freezing/melting temperature being 32 degrees F, not a very useful number!

The boiling temperature for water was then set at 212, again not a very useful number. The two temperatures are 180 degrees apart, again a multiple of 2.”

In short, Americans consider themselves different from the rest of the world and one cannot raise their temperatures arguing about what is good weather.

Have a nice day!

All the measuring standards used in America are different from those used by the rest of the world and it is quite bothersome to someone who has not learnt science beyond the high school level, but even to the qualified engineers they are irksome. For measurement they still use Inches and yards and there are different standards of gauge and threads and while ordering spares I remember when I was sailing, we had to used have a lot of problem because the catalogues with American standards wouldn’t mention the corresponding equivalents in International standards. Even there are British Standards too for many things and they are still used by some countries and not understood by those living in other countries.

True. Except in currency and coins, America does not like metric/decimal systems popular with rest of the world.

Decoding M.Bulgakov’s The Crimson Island A.Charumati Ramdas The Crimson Island, written by the author of Master and Margarita, remains one of the most mysterious plays of world. Looking quite innocent on the surface, the play, which saw the stage just for one theatrical season, only in Moscow, was first published as a satirical sketch on 20th April 1924 in…

Our Trip to Bahamas Share with: 0 0 votes Article Rating

Pres. Trump makes some progress in building the southern wall to stop illegal immigration from south-America. https://www.facebook.com/WhiteHouse/videos/562221590985682 However, he now faces court challenges for using some of funds assigned for Defence to build the Mexican wall. Trump could tell Mexicans they must pay for the wall by giving away Mexican oil at $35/barrel, next 10…

How my 60th birthday was celebrated in Aa Me Ri Ca

I went back in time to mull over the shocker of a birthday I had to encounter when a nephew of mine organized it without telling me, in my own home! This enterprising nephew who was pursuing a PhD program in electrical engineering at a nearby University campus, would occasionally drop by late at night…