Nirmal Purja of Nepal has achieved something which is nearly impossible. By climbing the world’s 14 tallest mountains in a span of 7 months. Climbing just one of them is a tall order, but all of them in such a short span of time. Hence the title of a recent documentary telling the story of such a nearly impossible feat. The documentary, having the same title as that of this blog, is available on Netflix. Very inspirational one given that the achiever is an Eastern climber.

The quest to climb mountains is as old as human existence on Earth. Discovery of higher mountains and understanding and developing strategies to reach the summit is as old as human civilization. When the North pole and the South pole were reached in early part of the twentieth century, the third pole left was the highest mountain on the Earth. In 1953, a New Zealand beekeeper called Edmund Hillary and a Sherpa Tenzing Norgay reached the summit of Everest.

Sherpas are traditionally the mountain people living in Nepal and Tibet. Sherpas have high endurance having been acclimatized to live at higher altitudes. And westerners are the typical mountain climbers in the spirit of adventure.Westerners sponsor the climbing expeditions, while the Sherpas carry load, lay down ropes and guide the expeditions. It is a thankless job and no expedition can succeed without the help of the Sherpas. By and large, the Sherpas are the unsung heroes of the endeavor. It was Hillary’s generosity that he shared the glory with Tenzing. He decided that both of them would step on the summit of Everest at the same time.

The Himalayas is the highest mountain range in the world. Nestled between India, Nepal, China and Pakistan, it has several of the world’s tallest peaks – at least 14. These peaks are all taller than 8000 meters, hence known as 14 eight thousanders.  Tallest and the most famous of them is Everest which lies between Nepal and China, while the second highest K2 is in Pakistan. Given below is a map from internet  of all of them and their locations. 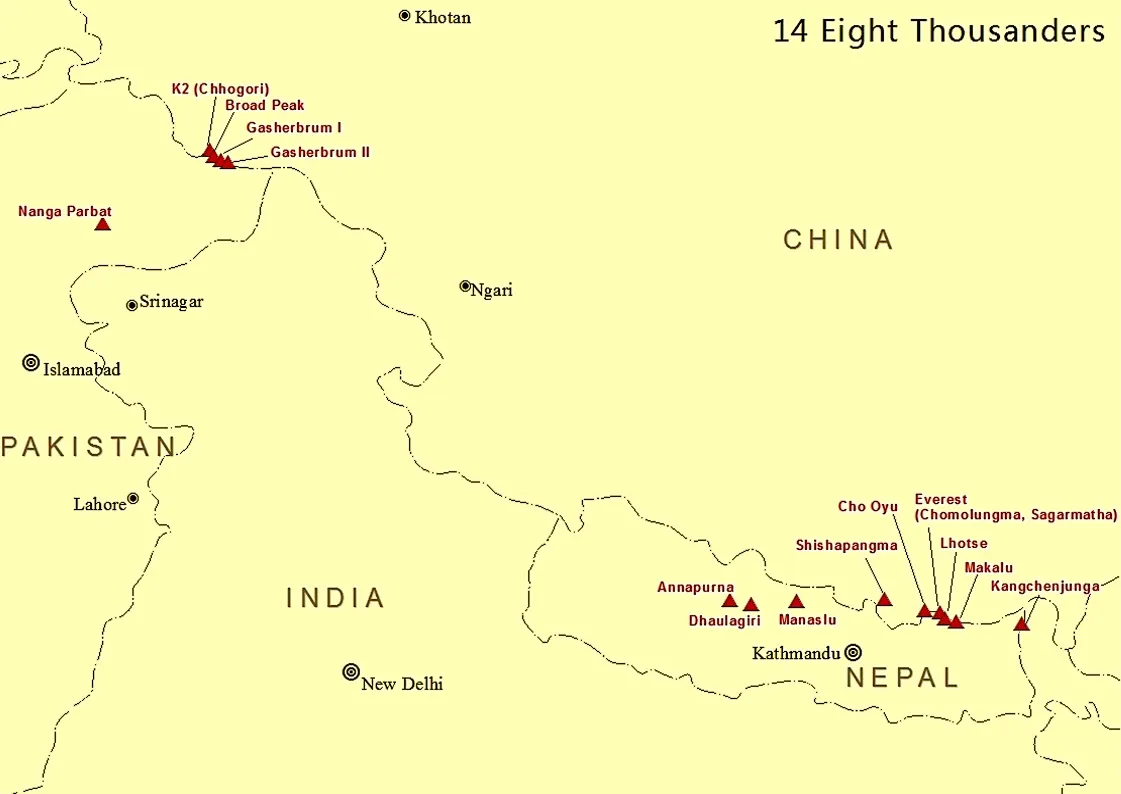 Once climbing Everest became more standardized, climbers started accepting challenges to scale all the 14 mountains higher than 8000 meters. Reinhold Messner, the Italian climber, was one such adventurer who took about 16 years to accomplish. Purja, a veteran of Nepalese Army and who underwent special forces training in the UK, took up the challenge of sponsoring an expedition.

The amount of physical fitness he developed in preparation for the expedition is really amazing. The peaks of such tall mountains are in the death zone. Which means that the air is much thinner than it is at sea level. Even with oxygen cylinders, it becomes difficult to make an effort to climb. The peaks are perpetually engulfed in snow and ice. The slippery slopes, along with gusty winds at times, leading to avalanches, make the conditions very hostile.

The logistics were tough too. Because the groups of mountains are located in different areas. The five mountains in Pakistan were attempted together in quick succession. One group of 3 mountains in western Nepal.  Kanchenjunga, the third highest mountain in the world, is closer in the East to the borders of India and Sikkim. Everest and 2 others close to each other in Nepal. The last pair of mountains is in China. Purja had difficulty in getting the permission from China. Eventually he had to go through diplomatic channels to get the permission.

All in all, an excellent achievement for a person from the subcontinent. At a news conference, he quips “if a western climber achieved the same, the media attention would be much more than it is now”. Hope this will inspire more people to achieve even greater heights.